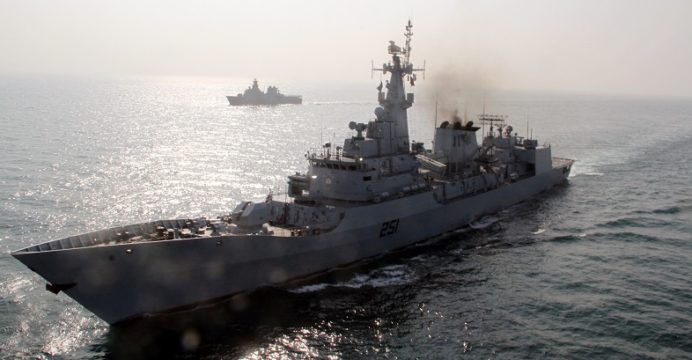 Designated AMAN 2017, the exercise will stress many mission scenarios including, among others, anti-piracy, at-sea replenishment, and gunnery firings. AMAN had been held on a biennial basis from 2007 to 2013.

Of the 15 ships participating in AMAN 2017, China, the U.S., and Russia will each send three, while Turkey, Britain, Indonesia, Sri Lanka and Australia will each send one. These countries, alongside Malaysia, Nigeria and the Maldives, will also send their respective special operations forces and marines. Japan will join with two of its P-3C maritime patrol aircraft (MPA).

Dozens of other countries from Asia, the Middle East, Africa and Europe will also be attending AMAN 2017, these include, among many others, Azerbaijan, Brazil, Italy, Morocco, Nigeria, Poland, Qatar, Saudi Arabia, South Africa, South Korea and Turkmenistan.

The Commander of the Pakistan Navy Fleet, Vice Admiral Arifullah Hussaini, lauded the Pakistan Navy’s role in the Arabian Sea, particularly its participation in Combined Task Force 150 (CTF-150) and CTF-151, which are multi-national coalitions aimed at mitigating piracy, terrorism and other maritime crimes.

In the lead-up to AMAN 2017, the Pakistan Navy had conducted a series of bilateral naval exercises in late 2016 with Turkey, China, Russia and Oman. In comparison to these earlier initiatives, AMAN – especially AMAN 2017 – is a larger and higher profile event. However, the focus appears to be largely on maritime security in the context of countering piracy, terrorism, trafficking and other maritime crimes.

The participation of the U.S. and China was to be expected, but Russia’s entry as one of the three leading contributors is a new development. Thus far, Russia appears to be shaping its growing defence ties with Pakistan on internal security, counterinsurgency and counterterrorism issues, but it is intent on showing that it has formal defence relations with Pakistan.