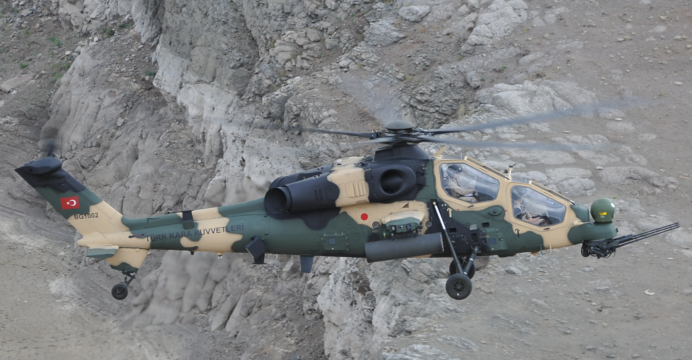 TAI General Manager confident of a T-129 sale to Pakistan

As per the Milliyet, Kotil confirmed that TAI is able to export the T-129, particularly its CTS800 turboshaft (developed by Honeywell and Rolls-Royce), indicating that the company has the requisite export licenses.

Kotil added that TAI is actively working to land a T-129 sale with Pakistan. A T-129 was sent to Pakistan for tests in June 2016, in which its hot-and-high and endurance capabilities were examined.

Kotil reportedly claimed that TAI “will sell [T-129s] to Pakistan in the coming months.”

TAI acquired the T-129 from AgustaWestland as part of the Turkish Armed Forces’ (TSK) requirement for new attack helicopters in 2008. The platform’s production was entirely transferred to Turkey.

Aselsan and Roketsan are providing the T-129’s onboard electronics and munitions, respectively. The Turkish company Meteksan is testing a millimeter wave radar for the T-129.

TAI and the Turkish Undersecretariat for Defence Industries (SSM) view Pakistan as a major prospective client, one that can provide the T-129 a strong “reference” for the aircraft, TAI and the Turkish defence industry. However, Pakistan’s ability to fund big-ticket defence hardware is relatively strained, requiring prospective suppliers to sell on affordability and term-based financing.

SSM cited the lack of financing mechanisms as an obstacle to its big-ticket defence exports. With Turkey aiming to become a defence and aerospace exporter, Ankara has offered to pilot financing with Pakistan. Turkey agreed to extend a USD $400 million loan for Pakistan’s purchase of four MILGEM corvettes.

During the 2016 International Defence Exhibition and Seminar (IDEAS), which took place in Karachi in November, TAI and SSM officials told MSI Turkish Defence Review that T-129 talks with Pakistan progressed. TAI said that Pakistan was satisfied with the T-129’s performance and weapons package (offered by Roketsan), and that it was upon Islamabad to call for formal negotiations.

It is not clear where matters currently stand. Temel Kotil’s statements could be taken to suggest that the deal is now progressing to negotiations (for aircraft quantity, configuration, munitions and maintenance package), but it is not conclusively different than what had already been said at IDEAS. In other words, it could simply mean that TAI is confident a sale could happen “in months” provided negotiations are initiated – there are no official statements from either side indicating the start of negotiations.

In parallel, Pakistan is also continuing with its purchase of Bell Helicopters AH-1Z from the U.S. Of the 15 helicopters approved by the U.S. State Department, Pakistan has thus far ordered 11 aircraft. The AH-1Z will begin supplanting the Pakistan Army’s ageing AH-1F/S. The Army is also trialing the Changhe Aircraft Industries Corporation Z-10. Four Mi-35s from Russia are also on order.