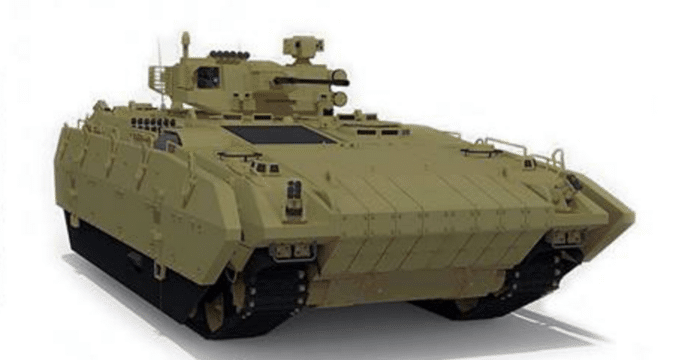 Designated as the “Berserk”, the new tracked IFV will retain the Oplot-M’s chassis and 6TD-2 diesel engine, which has an output of 1,200 hp. This will offer the Berserk a top speed of 73 km/h. It will weigh 46 tons.

As per the materials offered by Defence Blog, the Berserk IFV will have internal space for three crew and eight passengers. In lieu of the Oplot-M’s welded 125-mm based gun turret, the Berserk will be armed with a remotely operated weapon station with (seemingly) a 25-mm or 30-mm cannon.

The Berserk IFV will be configured with explosive reactive armour (ERA), an active protection system (APS), and 360-degree viewing for the crew. The IFV’s frame will comprise of “multi-layered combined stationary armour with elements of composite materials.”

If brought to fruition, the Berserk IFV would be a valuable addition to Ukraine’s armour catalogue. It would add a new product, but more importantly, Ukraine can potentially offer the Oplot-M and Berserk IFV as a complete armoured solution.

Some armies have tracked IFVs and armoured personnel carriers (APC) accompany their MBTs, and a common supply channel supporting these different vehicles eases logistical and maintenance strain. These IFVs can transport troops and engage in fire-support missions. In some cases, the IFV may also serve as a command vehicle or post for manage information (e.g. video feeds) from the combat area.

In parallel, the Ukrainian company Arey Engineering Group is developing a remotely operated tank turret as a retrofit upgrade for legacy T-64 and T-72 MBTs. Considering KMDB’s apparent efforts to develop a universal armour platform using the Oplot-M, the T-Rex could be a step towards a Ukrainian counterpart to the Russian Armata platform. However, there are major technology gaps – such as onboard sensors – that Ukraine will need to fill, potentially by sourcing from foreign suppliers.