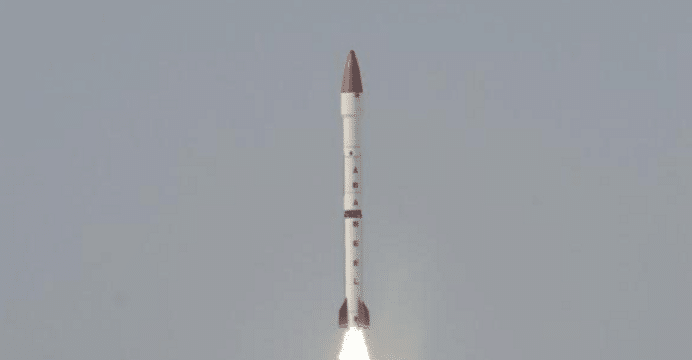 Designated the Ababeel, the medium-range ballistic missile (MRBM) has a maximum range of 2,200 km.

As per ISPR, “the test flight was aimed at validating various design and technical parameters” of the Ababeel, which was designed and developed to ensure the “survivability of Pakistan’s ballistic missiles in the growing regional Ballistic Missile Defence (BMD) environment.”

With MIRV, countries can deploy multiple warheads from a single ballistic missile. Each warhead is equipped with an inertial navigation system (INS), enabling the user to target different locations using the same payload. This enables the single ballistic missile to stress a BMD’s ability to simultaneously intercept multiple targets, thereby increasing the scope for a warhead to strike its target.

The Ababeel MRBM test comes at the heels of the Babur 3 submarine-launched cruise missile (SLCM), which was recently tested from an underwater mobile platform. Where the Babur 3 SLCM represents a clear step in building Pakistan’s assured second-strike capability, the Ababeel is a major step towards strengthening Pakistan’s first-strike element.

The Ababeel is an example of that qualitative development. Granted, in hindsight of India’s desire to build a strong BMD umbrella coupled with deeply layered air defence coverage (e.g. S-400), Pakistan pursuing MIRV technology is not surprising. In 2010, the BBC reported that Pakistan was developing a MIRV solution with Chinese assistance, indicating that this program is not recent.

This is merely speculation, but it is possible that Pakistan has extended its usage of miniature plutonium warheads (e.g. developed for SLCMs) to the Ababeel program. The Shaheen-series, which is the mainstay of Pakistan’s MRBM arsenal, may be serving as the core rocket platform for the Ababeel.

The Ababeel also opens the question of how much further Pakistan intends to improve its ballistic missiles, e.g. could maneuverable re-entry vehicles (MARV) be on the development roadmap?

Note: This is not a news story, but a piece for discussion. The details offered in this section are not authoritative pieces of information, but simply perspectives of the author.

The introduction of the Ababeel is significant, but could Pakistan extend MIRV technology to its second-strike portfolio as well? Currently, the second-strike element is centered on cruise missiles, which can be deployed from land, sea and air. In this respect, MIRV-enabled SLBMs would be a significant addition.

Although Pakistan is unlikely to procure nuclear-powered ballistic submarines, conventionally-powered air-independent propulsion submarines (SSP) that happen to be sufficiently large enough to carry and deploy SLBMs do have precedence, albeit as a one-time test platform (i.e. the Chinese Type 032 Qing-class SSP). The notion of building upon such a platform is not implausible, though it would unique.

Regarding multiple warheads, could Pakistan also imbue its conventional arsenal with similar attributes? For example, a solution analogous to the U.S. CBU-97 Sensor Fuzed Weapon could involve the Ra’ad air-launched cruise missile dispensing guided bomblets. A dispenser could enable Pakistan to engage multiple and dispersed targets, such as, among others, air fields, air defence sites, shipyards and dockyards.