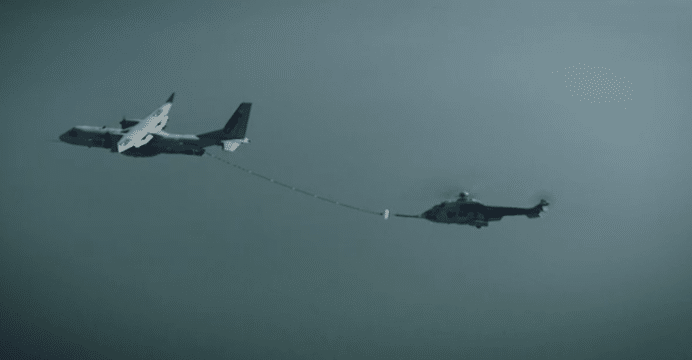 In an official press release, Airbus DS says that it had conducted the test in France in December 2016. As per Airbus DS, “contacts were executed at speeds of 105-115kt (194-213 km/h) and both crews reported smooth and simple operation.”

In September 2016, Airbus DS refuelled a C295 from another C295, fulfilling the promise it had made at the 2016 Farnborough Air Show in the U.K.

The C295’s refuelling configuration comprises of a hose-and-drogue system channelling fuel from the aircraft’s main fuel tanks. However, the end-user can also opt for auxiliary tanks, which can also double as a forward fuel station for ground operations.

The Airbus DS C295 is a popular fixed-wing utility aircraft platform that has attracted customers in the developing and developed world alike. Its latest variant, the C295W, benefits from new winglets which Airbus DS says offers additional range and 4% in fuel savings.

In October 2016, Bangladesh ordered a single C295W for the Bangladesh Army’s Aviation branch. In December, the Government of Canada selected the C295W for its Fixed-Wing Search and Rescue (FWSAR) program, enabling Airbus DS to raise the C295’s production run to 185 aircraft (between 25 countries).

Airbus DS is striving to position the C295 as a versatile – but affordable – platform capable of taking on many valuable mission roles such as airborne early warning and control (AEW&C), in-flight refueling, close air support (CAS), and anti-submarine warfare (ASW)-capable maritime patrol, among others. Airbus DS hopes that the C295’s affordability – achieved with its existing user adoption and scale – can be paired to the idea of using a single platform to fulfill many critical roles. In turn, users will benefit from both a low-cost platform and singular logistics and maintenance channel.