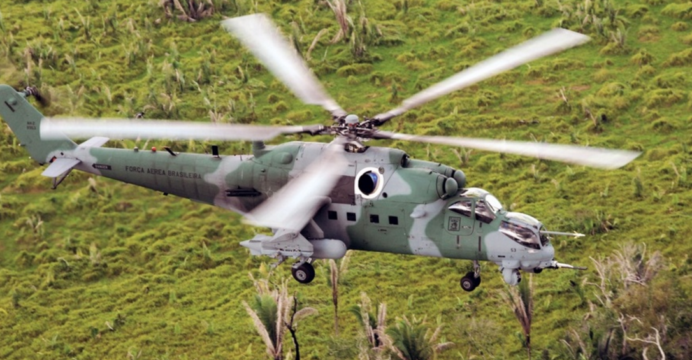 “The aircraft have been delivered and are now awaiting official induction, after which they will be commissioned to take part in military operations,” NAF Chief of Air Staff Air Marshal Sadique Abubakar informed local media.

The Mi-35M is the latest iteration of the venerable Hind air assault platform. It is equipped with a new on-board electronics suite comprising of various self-protection measures (particularly for infrared-guided anti-air missiles) and updated avionics, including multi-function displays. The Mi-35M can be armed with a range of air-to-ground munitions including, among others, laser-guided rockets and anti-tank missiles.

The NAF is going through a comprehensive modernization program. The Mi-35Ms will contribute to the NAF’s close air support (CAS) efforts, which will be directed at the country’s counterinsurgency (COIN) campaigns. Nigeria is also hopeful of securing U.S. approval for the sale of Embraer EMB-314 Super Tucano CAS aircraft to bolster its CAS arm. Although a turboprop, the Super Tucano is capable of deploying air-to-ground munitions – including precision-guided bombs – much akin to a fast jet. It is often marketed as a lower cost, but attack-centric, alternative to fast jet fighters such as the F-16.

In terms of fast jet fighters, the 2016 Nigerian Federal Budget confirmed the purchase of three JF-17 fighters from Pakistan Aeronautical Complex (PAC). It is likely that the JF-17 falls under the NAF’s plans for “platform acquisitions … for counter air, counter surface, air ops for strategic effect and air support operations” – i.e. a genuine multi-role asset. The outlined scope also opens the possibility of Nigeria procuring a range of air-to-air and air-to-surface munitions for the JF-17, such as the SD-10 beyond-visual-range air-to-air missile and C-802 anti-ship missile, among others.