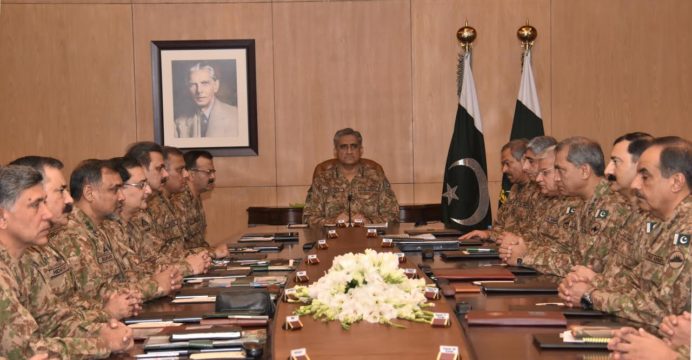 Inter Services Public Relations (ISPR) reports that during the 198th Corps Commanders’ Conference of the Pakistan Army was held on Tuesday, 10 January 2017.

The Chief of Army Staff (COAS) Gen. Qamar Javed Bajwa, who presided over the meeting, oversaw a “comprehensive review of [the] security environment and operational preparedness of the Army.”

Pakistan’s ongoing counterinsurgency (COIN) campaign, Zarb-e-Azb, was among the issues. Gen. Bajwa ordered that operations continue and that cleared areas be “stabilized.” In that vein, the COAS ordered that the Army “intensify efforts” to facilitate the return of internally displaced persons (IDPs).

Although Gen. Bajwa has committed to maintaining continuity in the Pakistan Army’s emphasis on COIN, news reports have emerged of changes in “methodologies.” An Army official reportedly told The Express Tribune that changes (in the COIN-centric framework) are underway, though he did not offer specifics.

However, unconventional and asymmetrical security threats have been accepted as “the new normal”, suggesting that policy and/or legislative measures may be introduced – or revived – to manage the apparent environment. The Pakistani government is seeking to renew military courts, which the Army had posited as integral to its COIN efforts. This will be of interest to the Army.

The China-Pakistan Economic Corridor (CPEC) and Baluchistan, especially Gwadar, will also inform the Army’s COIN framework. Outcomes could involve additional resource allocation from the Army to protect CPEC. In turn, these dynamics could shift some responsibilities in the existing COIN effort (in the Tribal Areas) to Pakistan’s paramilitary entities, such as the Frontier Corps.