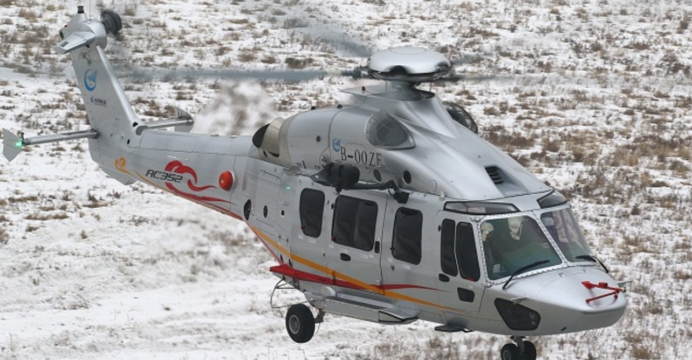 In an official press release by Safran Helicopter Engines, the WZ-16 powered AC352 was flown in Harbin on Tuesday, 20 December. As per Safran, the WZ-16 “met all performance targets set” for the test flight.

As per Safran, the WZ-16 (also designated Ardiden 3C) is a “new-generation turboshaft in the 1,500 to 2,000 shp power class. It features a remarkably compact modular architecture, a best in class power to weight ratio with a low cost-of-ownership.”

The EVP of Safran Helicopters Engines, Cyrille Poetsch, added that the test-flight “marks a major milestone in [Safran’s] partnership with China’s aerospace industry.”

Airbus Helicopters already manufactures the AC352 under the H175 designation, but unlike the AC352, which will support China’s vast civil aviation needs, the H175 is powered by a Pratt & Whitney PT6C-67E. The Safran-AECC WZ-16/Ardiden 3C is slightly more powerful, but its principal value rests in the reality that China, via its newly formed aero-engines firm AECC, will have ownership and control over the engine.

The WZ-16/Ardiden 3C will be certified by the European Aviation Safety Agency (EASA) and Civil Aviation Administration of China (CAAC) in 2017 and 2018, respectively.

The AC352 is a seven-ton multi-purpose utility helicopter currently marketed for civil aviation roles, such as search and rescue and transport, among others. Capable of ferrying up to 18 passengers, the AC352 will serve as one of AVIC’s leading civil aviation products for China’s domestic market, which is expected to generate considerable demand in the government and private sector.

The AC352 joins the AW139 and S-70i in the utility helicopter space. It is not clear to what extent AVIC will market the AC352 considering Airbus Helicopters, the co-owner of the platform, is marketing the H175. With demand from the Chinese market alone, the AC352/H175 platform could become quite prolific, which will be a necessity to scale the development overhead (which includes the aircraft and its engine) and reduce the unit-cost.