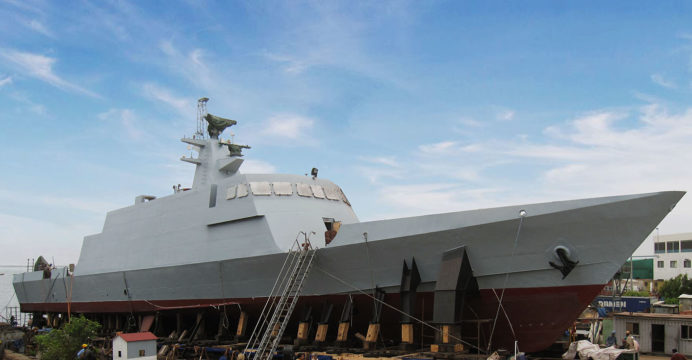 The Pakistan Navy presently operates two Azmat-class FACs, the PNS Azmat and PNS Dehshat. The third Azmat-class FAC was launched by KSEW for sea trials in September of this year.

The four Azmat-class FACs were ordered from China Shipbuilding and Offshore Company (CSOC) in 2010, with three of the FACs to be built in Pakistan by KSEW. The FACs were ordered following a breakdown in efforts to procure four corvettes from Turkey in the late 2000s.

With a displacement of 560 tons, the Azmat FAC is armed with eight C-802 anti-ship missiles (AShM), each missile providing the Azmat an attack coverage of up to 180 km. The FAC is also armed with one 30 mm forward gun, two 12.7 mm machine guns, and a single AK-630 close-in-weapons-system (CIWS) for point-defence coverage (against incoming AShM).

The Azmat FAC can travel up to a speed of 30 knots (55 km/h) and range of up to 1000 nautical miles (1852 km). The ship was designed with low-detectability and low-observability characteristics.

The Pakistan Navy is using the Azmat-class FAC to support its peacetime littoral patrol and policing tasks. In wartime, the Azmat-class FACs will be called upon to guard Pakistan’s coastal assets, such as its ports, shipyard(s), and dockyards, from attacks by intruding enemy surface warships (including other FACs).

As part of its efforts to strengthen its littoral defence stature in and around the Gwadar deep-sea port, the Pakistan Navy recently established a new unit, Task Force-88 (TF-88).

As per Navy officials (via Dawn News), TF-88 will be equipped with “ships, Fast Attack Craft, aircraft, drones, and surveillance assets.” In this respect, the Pakistan Navy announced that it is seeking four to six new FACs from China and/or Turkey, with the latter offering its new FAC-55 design. It is also possible that additional Azmat-class FACs (potentially with upgrades) could be procured to fulfill the TF-88 requirement.