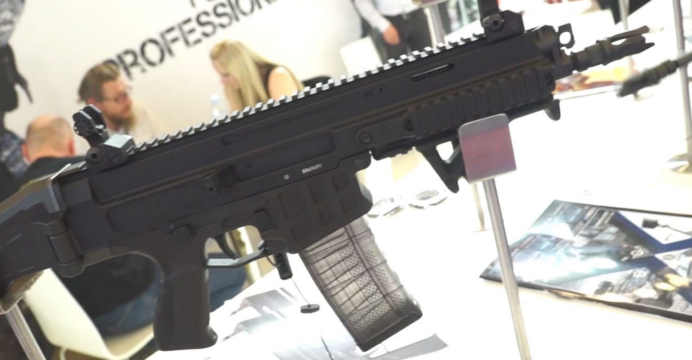 This is a three-part series discussing Pakistan Ordnance Factories’ (POF) development and long-term commercial engagement plans. Part one offers a broad overview, especially of 2016, in POF’s activities and the Government of Pakistan’s focus on steering the company to be commercially competitive. It also examines POF’s memoranda-of-understanding (MoU) with Czech and Polish companies and the relevance of those MoUs to POF’s plans. Part two studies POF’s letters-of-understandings with Fiocchi, CSG, and PSG in relation to its hopes for commercial viability. Part-three concludes with an overview of POF’s new product catalogue, which will comprise of licensed off-the-shelf and domestic designs.

Dependent on POF’s planned manufacturing and production improvements are the company’s catalogue of up and coming small arms. These next-generation designs have been – or are in the process of being – selected by the Pakistan Army for its own use, which will generate considerable scale and adoption. POF’s next generation product catalogue will be formed of domestically developed and off-the-shelf designs.

In terms of in-house designs, POF officially unveiled its Light Sniper Rifle (LSR) platform at IDEAS 2016. The LSR is a bolt-action sniper rifle with a range of 800 metres. The LSR was designed and developed in-house by POF with the aim of providing an affordable rifle platform to the Pakistan Army. Once the LSR enters full-scale production for the Pakistan Army, POF will return to the design and work on extending its range and barrel life. POF’s infrastructure upgrade work (in collaboration with CSG and PGZ) could contribute to the LSR’s development as well as POF’s ability to produce relatively high-quality units at competitive cost.

At IDEAS, POF signed an LoU with CZ to “intensively” negotiate for the supply and technology transfer for small arms. CZ and POF will work to have the latter begin with light assembly, but gradually ramp up to complete – or ‘maximum’ –  local manufacturing.

Publicly available details of the LoU do not specify exactly what small arms designs POF and CZ are discussing, but thus far, the only CZ system to have been evaluated by the Pakistan Army is the BREN. The Pakistan Army examined a 7.62×39 mm variant of the BREN, potentially the CZ-807 (the specific make examined by Pakistan has a few design elements from the CZ-806 BREN 2, such as the new butt stock).

The CZ-807 is a multi-caliber design in that with a few end-user changes, specifically to the lower insert-well, bolts and firing pins, the rifle can be used to fire 7.62×39 mm and 5.56×45 mm rounds.

For the most part, Pakistani infantry involved in the counterinsurgency (COIN) campaign in the Federally Administered Tribal Areas (FATA) use 7.62×39 mm Type 56 (i.e. Chinese AK-47 builds). Pakistan’s various special forces operations (SOF) units have been observed using various 5.56×45 mm rifles including, among others, the M4 and FN F2000. A multi-caliber design such as the CZ-807 would standardize the distribution channel, and in turn, ease logistics, training and acquisition costs.

The Pakistan Army was also seeking a successor to the HK G-3 7.62×51 mm battle rifle, which is the Army’s standard issue rifle for its eastern deployments. In this respect, the Army had been evaluating several off-the-shelf designs, namely the FN SCAR-H, Beretta ARX-200, and Zastava M21. Although local media outlets reported that the ARX-200 and SCAR-H were the finalists for replacing the G-3, it is unclear where these rifles stand considering POF’s LoU with CZ.

Granted, the specifics of POF’s LoU with CZ are not publicly known. For example, it may not be regarding the BREN but, instead, the Scorpion sub-machine gun or CZ-75 handgun. It is plausible, but as far as the Pakistan Army’s dealings with CZ are concerned, the BREN is the only known system to have been tested. That said, if POF is not pursuing the BREN, then the subsequent points are irrelevant.

However, in the condition that POF is pursuing the BREN, the idea that the ARX-200 or SCAR-H of being sought would need to be measured against the following considerations. First, the BREN, ARX, and SCAR serve the same functional purpose as platforms. These are multi-caliber designs, and the notion of adding an entirely different platform for the sake of one caliber (7.62×51 mm) when that format could be sought from CZ through the BREN could be considered a needless pursuit. On several occasions, CZ stated that it was interested in developing a 7.62×51 mm version of the BREN. In fact, Armádní Noviny reported that  7.62×51 mm versions of the BREN 2 exist using 14” and 16” barrels.

Scaling the BREN platform to fulfill the 7.62×51 mm requirement would mean platform standardization, which in turn would translate into standardized training, logistics and maintenance across the Army and, potentially, the Frontier Corps, Rangers, law-enforcement agencies (LEA), etc. Be it the BREN or another design such as the SCAR or ARX, it is unlikely that POF will manufacture multiple platforms.

Commercial conflict-of-interest could also prevent POF from manufacturing two competing platforms. In return for licensed production and third-party exports, it is difficult to imagine CZ, Beretta, or FN Herstal permit POF to back a competing platform. Conversely, POF’s ability to accrue the maximum amount of flexibility and freedom in marketing the original manufacturer’s rifle is contingent on an ability to exclusively commit to that platform. That exclusivity can also be leveraged to pursue preferable pricing in acquisition and licensing.

It appears that a multi-caliber rifle platform will form the center of POF’s future product catalogue. Scale from adoption in Pakistan should help with distributing the investment made in upgrading POF and in securing the off-the-shelf design. This will be a significant shift from the HK G3 in several respects, not least in terms of reduced weight and recoil, but modularity as well, which will open POF to offer solutions for the 5.56×45 mm, 7.62×39 mm, and 7.62×51 mm markets using a single core design.

POF currently produces MP5 sub-machine guns (SMG), and MG3 machine gun. It is possible that these will also be supplanted by new designs, but this has yet to be publicly confirmed.