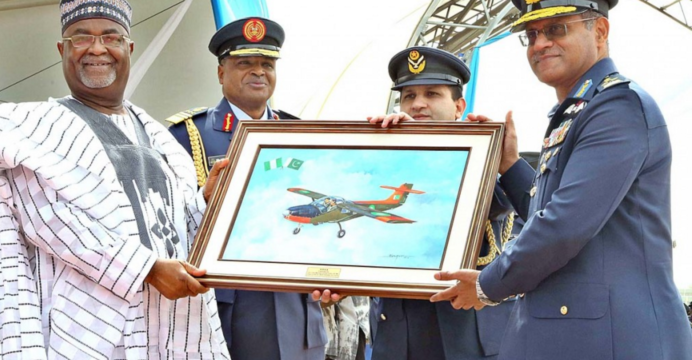 The aircraft were handed over in a ceremony held at Kaduna Air Base in Nigeria. Kaduna is the home of the NAF’s Training Command and Air Force Institute of Technology.

As per Flight Global, these four aircraft are from existing PAF/PAC stocks and are being loaned to the NAF as an interim measure until the NAF’s new-build Super Mushshak aircraft are delivered.

A total of eight surplus units will be loaned to the NAF.

Nigeria ordered 10 Super Mushshak in June as part of a comprehensive effort to modernize its air force.

As part of the program, the PAF will also provide instructors for the NAF’s 310 Flying School to help train future NAF pilots. A local support facility for training and technical support will also be raised in Nigeria (Associated Press of Pakistan).

In 2016, PAC has seen renewed traction with the Super Mushshak, a heavily upgraded variant of the Saab MFI-17 Safari with, among other improvements, a glass cockpit and uprated engine.

The Super Mushshak is marketed as a basic trainer suitable providing basic flying-competency and for screening novice pilots ahead of intensive flight training programs.