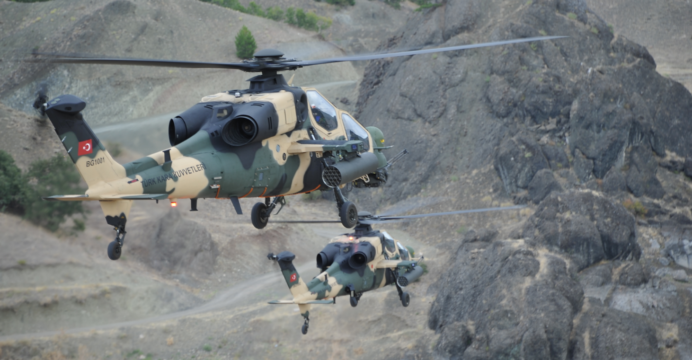 TAI and Meteksan have spent the past several months integrating the MİLDAR to the T-129. Currently, the MİLDAR-equipped T-129 is undergoing ground control tests (C4Defence).

The Turkish Undersecretariat of Defence Industries (SSM) commissioned Meteksan to develop the radar in June 2013 with the aim of delivering the system to the Turkish armed forces in 2018-2019.

An millimeter wave radar is essentially an Extremely High-Frequency synthetic aperture radar (which is typically used to ‘map’ a picture of the ground). Millimetric wave radars for helicopters, such as the AH-64D Longbow, are used for target tracking and engagement, especially for moving vehicles such as tanks.

Functionally, a millimeter wave radar can be used against ground targets in the same manner as an airborne radar can be used against aerial targets. For example, the MİLDAR could identify and track targets on land. If equipped with millimeter wave radar-tipped air-to-ground missiles, the T-129 can engage those targets. Semi-active seekers would require the MİLDAR to keep a lock on the target for the missile, but an active-seeker (akin to the one on the MBDA Brimstone) would provide fire-and-forget capability.

It appears that the T-129 ATAK will carry the MİLDAR from one of its wing-based stations, which is unlike the AH-64D, which carries the AN/APG-78 above the main rotor.