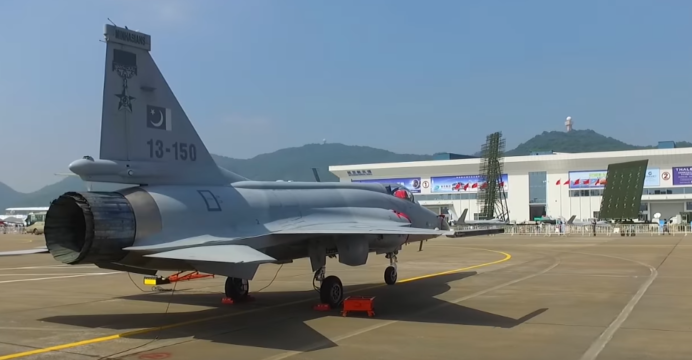 The Pakistani media outlet The News International is reporting that the Royal Saudi Air Force (RSAF) is interested in procuring a “hefty” number of JF-17 Thunder lightweight multi-role fighters.

The Commander of the RSAF, Major General Mohammed Saleh al-Otaibi, is currently on an official visit to Pakistan.

On Monday, Major Gen. al-Otaibi presided over the graduation ceremony of the Pakistan Air Force (PAF) Academy’s 117th Combat Support Course, which included officer cadets from the RSAF’s 83rd Engineering Course. The Commander of the RSAF also met with Pakistan’s Chief of Naval Staff and Chief of Air Staff.

Although The News International was able to learn of Saudi interest in Pakistani defence goods from Saudi Arabia’s Ambassador to Pakistan, Abdullah Marzouk al-Zahrani, its JF-17 report was attributed to Gen. al-Otaibi. Quwa has not been able to find an official statement or secondary source to verify the report.

Although official Saudi interest in the JF-17 cannot be verified at this time, it is a fact that the PAF and Pakistan Aeronautical Complex (PAC) have been engaged in broadly marketing the JF-17. In August, the PAF’s Chief of Air Staff Air Chief Marshal (ACM) Sohail Aman issued a formal JF-17 and Super Mushshak offer to the Kuwaiti Air Force. There have also been reports of PAC marketing the JF-17 to Qatar.

The entirety of the RSAF’s main combat aircraft fleet is comprised of medium to heavyweight fighters such as the Boeing F-15, Eurofighter Typhoon, and Panavia Tornado. However, until quite recently, the Saudis had also maintained a light fighter force in the form of Northrop F-5E Tiger IIs.

In one respect, the JF-17 could be viewed as a direct successor to the F-5E. The Thunder would retain the low acquisition and low operational cost profile of the F-5 but would add modern air combat capabilities, i.e. beyond-visual-range air-to-air missile (BVRAAM) compatibility and tactical data-link connectivity. The twin-seat JF-17B, which is due to fly by the end of this year, could also be sought to serve as a fighter conversion unit or as a dedicated ground attack fighter.

Alternatively, or in tandem, Riyadh’s mix of increasingly strenuous austerity measures on spending and its ongoing – and costly – campaign in Yemen could be pushing the RSAF to seek lower cost and more readily available combat solutions.

At Air Show China, which took place last week in Zhuhai, Aviation Industry Corporation of China (AVIC) had showcased a diverse range of munitions. These included directly analogous counterparts to new American and Western air-to-surface designs, including, among others, the Joint Stand-off Weapon (JSOW), Brimstone, and Small Diameter Bomb (in the form of the YJ-6, YJ-9E, and YL-14, respectively). For reference, the YJ-9E is being marketed as a 15-25 km air-to-ground missile with seeker modularity; the end-user has the option to equip the YJ-9E with an active radar-homing seeker. In effect, the YJ-9E could be utilized as a fire-and-forget missile against armoured vehicles. In addition, AVIC is also offering laser and satellite-guided bombs and targeting pods.

In a sense, the JF-17 – and especially the JF-17B – could be utilized as dedicated attack platforms for heavy usage over Yemen, especially since both the delivery platform and its munitions could be had for a clearly lower cost than American and European alternatives. Furthermore, the heavy utilization of the JF-17 could enable the RSAF to preserve flight hours – and reduce maintenance costs – on its other platforms.

With at least one JF-17 prototype reportedly flying with the Guizhou WS-13 turbofan (Aviation Week, IHS Jane’s), AVIC should have no difficulty in assuring the supply of the JF-17 to Saudi Arabia (or other export customers). The entirety of the platform can effectively be sourced from China.

In a hypothetical JF-17 sale, the RSAF could be interested in configuring the JF-17 with Western European electronics. In this respect, PAC could potentially source the radar, avionics, and electronic warfare (EW) and electronic countermeasures (ECM) suite from Italy (i.e. Leonardo-Finmeccanica and Elettronica).

The JF-17’s low base cost does offer considerable vertical room for the end-user in terms of subsystem customization and configuration without severely raising overall cost. Subsystems designed for the Gripen NG and MiG-35, such as the Vixen 1000 (which seems identical to the Raven ES) active electronically-scanned array (AESA) radar and ELT/568 ECM suite, respectively, could make their way to the JF-17.

If the Saudis opt to assume greater ownership of the platform, they cold engage with their own choice of vendors and configure the JF-17 in Saudi Arabia. In fact, the JF-17 could even be a comparatively lower cost method of building a basis for domestic defence industry work. This would align with Riyadh’s Vision 2030 plan of having upwards of 50% of its defence needs to be sourced locally.