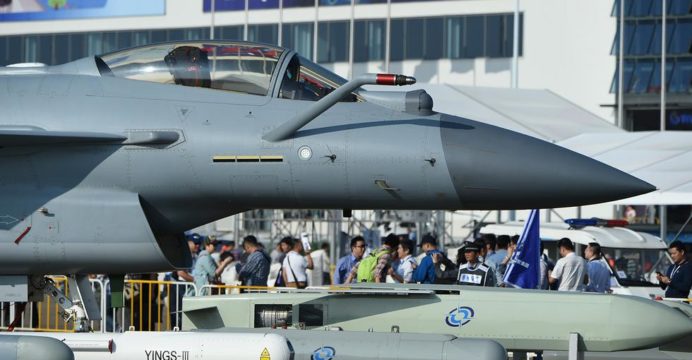 Will China clear the CAC J-10B for export?

Chengdu Aircraft Corporation (CAC) is offering a static display of its J-10B multi-role fighter at the Zhuhai Air Show, which is taking place this week.

In addition to the fighter, many new and existing air-to-air and air-to-surface munitions were also being shown alongside the People Liberation Army Air Force (PLAAF)’s emerging mainstay fighter.

It does not appear that Aviation Industry Corporation of China (AVIC) branded placards are near the J-10B, but it is possible that this fighter could be ready for export in the short-term. Currently, only the J-10A – under the designation FC-20 – is available for export.

It is not clear to what extent the changes to the J-10’s airframe is sensitive in the view of the PLAAF, though the subsystems – i.e. active electronically-scanned array radar and electronic warfare (EW) and electronic countermeasures (ECM) suite – should be of more concern.

However, with the Nanjing Research Institute of Electronics Technology (NRIET) showcasing an overtly export-centric AESA radar for the JF-17, it appears that the Chinese are in the position to release their next-generation subsystems to the market without risking their national security interests.

AVIC will not need to compete on pure performance, but rather, on the reality that it is offering capable solutions with current technologies at an affordable price. An export version of the J-10B would benefit from layers of economies-of-scale thanks to China’s expansive domestic market.

For example, the J-10 platform is the mainstay multi-role fighter platform of the PLAAF. At this stage, the research and development overhead will have been heavily distributed, resulting in a thin added cost to the prospective export-customer (on top of the cost of labour and materials).

It is the same case for the AESA radar and ECM/EW technology onboard the J-10B. The development of these subsystems is not tied to the J-10B but is, in fact, relevant to many applications, including solutions on land and at sea. If not already, the Chinese will be scale this technology expansively, once again putting subsystems from NRIET et. al on a favourable cost footing.

With the next-generation FC-31 being offered for export, it is curious that the J-10B has yet to enter AVIC’s portfolio. Clearly, the Chinese are not hesitant to release their AESA radar and newer EW/ECM technology, lest they would not be offering the FC-31.

In contrast to the FC-31, which has yet to secure backing (much fewer orders) from the PLAAF or People Liberation Army Navy (PLAN), the J-10B is a complete, adopted, and production ready fighter.

Access to the J-10B does not necessitate a separate investment in research and development (which is the case for the FC-31), and the J-10B already carries industry contemporary subsystems.

For an air force in need of a mature medium-weight fighter platform with qualitative drivers today, such as an AESA radar, the J-10B is more attractive than the FC-31. It is a tangible product.

One can point to Pakistan, but in addition, this fighter could readily attract a wider pool of countries that simply would not have access to the market’s existing AESA radar-equipped medium-weight fighters. The Zhuk-AME-equipped MiG-35 is essentially the only other option for countries such as Algeria or Iran.

The CAC J-10B has potential to secure sales in the short-term, which could be AVIC’s ticket to increase its relevance in the global fighter market.