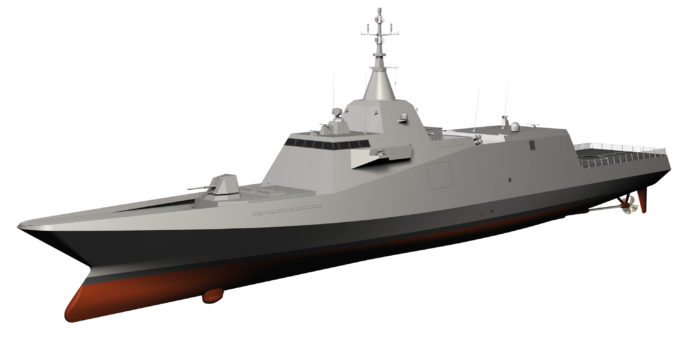 France in the process of developing new medium multi-role frigate

The French Navy, DCNS, Thales Group, and the Direction Générale de l’Armement (DGA) have been in the process of designing a new 4,000-ton multi-mission frigate for the French Navy (Defense News).

The new design, which is expected to choose from a shortlisted set of five proposals, will sit between the 6,000-7,000-ton FREMM (which forms the basis of the French Aquitaine-class and Italian Bergamini class) and the DCNS Gowind-line of corvettes. The French Navy is planning to procure five of these new frigates, which had been designated as Frégate de Taille Intermédiaire (FTI) – i.e. intermediate-size frigate.

It is likely that the high-cost nature of the FREMM has driven France to develop the FTI. The FREMM was envisaged in the 2000s with the aim of creating a versatile and long-range surface warship design. In fact, the heavy displacement of the FREMM places it in the range of legacy destroyers, enabling these platforms to possess relatively very capable sensor, armaments, and electronics support measures (ESM) suites. However, with a unit cost of €670 million (i.e. $738 million U.S.), the FREMM is not entirely tenable, especially in more cost-sensitive export markets.

In some respects, it appears that France is embarking on the same route as the U.K., which had tasked BAE Systems to design a more affordable frigate design to supplement the forthcoming Type 26 frigate (also known as the Global Compact Ship). Accessing the export market is one of the core objectives of the BAE program as well. France and the U.K. are planning to tie their respective ‘light’ frigate designs to their domestic acquisitions, so as to generate a measure of scale and further control cost. In turn, these designs could be relatively attractive export offerings.

Pakistan is currently interested in having Turkey’s Savunma Teknolojileri Mühendislik ve Ticaret A.Ş. (STM) design and produce four corvettes. Prior to this, the Pakistan Navy procured four F-22P – i.e. Zulfiqar-class – multi-mission frigates from China Shipbuilding Industry Corporation (CSOC). With fiscal responsibility and competing priorities looming large in the Middle East and Pacific Asia markets, respectively, emerging shipbuilders from South Korea, Turkey and India are increasingly becoming the ‘go to’ vendors for surface warship designs that – while not necessarily as sophisticated or cutting-edge as new Western designs – are modern and relatively very capable, but markedly more affordable.

Emerging shipbuilders can credit several native attributes to their success in managing cost. First, lower cost of labour and materials. Second, wide domestic scale. In South Korea for example, the Incheon-class frigate is envisaged to have a total production run well in excess of 12 ships, likely more if the legacy Ulsan-class frigates and Pohang-class corvettes are to be completely replaced. Likewise, the Turkish Navy is expected to procure 12 ships under the MILGEM program. Currently, financing mechanisms and credit are not readily available with emerging vendors, but this could change in the medium-term.

Returning to the issue of the French FTI program. It is worth noting that DCNS had proposed a concept in the late 2000s known as the FM400. The DCNS FM400 was a lighter derivative of the FREMM and it too had a stated displacement of 4,000-tons. To what extent the FTI will draw upon the FM400 is not known considering that the Gowind-line may serve as a rival line of inspiration.

In order to help scale – as well as provide further funding insurance – it would be interesting to see if BAE and DCNS opt to engage an external party to serve as a launch customer. Both vendors have experience dealing with Saudi Arabia, which balked at signing a $11.25 billion U.S. deal with the U.S. for four Multi-Mission Surface Combatant (MMSC) ships. DCNS could potentially work to build upon its La Fayette success in Saudi Arabia and market the FTI as an alternative to the MMSC. Efforts in Pacific Asia and North Africa should be expected as well.