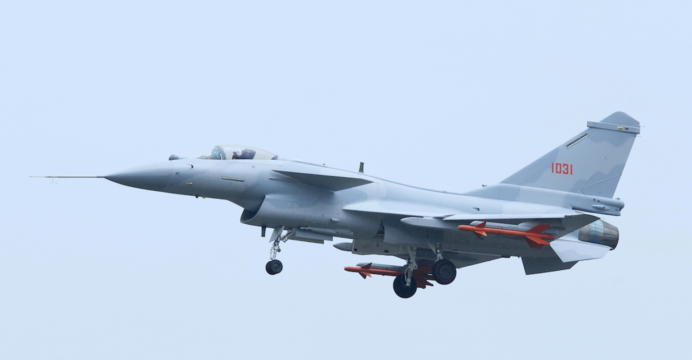 This series was written to add Quwa’s perspective to the increasingly prominent question of how the Pakistan Air Force (PAF) could address India’s strong – and increasingly stronger – air warfare lead. The Indian Air Force (IAF)’s recent Rafale acquisition has added another layer of urgency for the PAF.

Part one of this series offered a summary of the operational challenges facing the PAF. Part two offers a discussion of the costs associated with procuring foreign platforms; in turn, it makes a case for the PAF to continue focusing on the JF-17 Block-III as its core defensive answer. Part three examines the challenges with the Block-III, especially in terms of how it may not smoothly coincide with the time period the IAF is expected to induct the Dassault Rafale.

In part three, it became apparent that the PAF would require an off-the-shelf platform to ‘bridge’ the gap between the probable induction period of the JF-17 Block-III and the start of the IAF’s Rafale induction process. From a defensive standpoint, the JF-17 Block-III – with its active electronically-scanned array (AESA) radar – could be a credible solution, especially if procured in substantial numbers. However, as of late 2016, the Block-II program is still ongoing, and the PAF has yet to offer an update in regards to the Block-III. It would not be unfair to suggest that the Block-III may not be a factor until 2019, at the earliest. That is when the IAF is expected to begin inducting the Rafale.

The prospect of the PAF procuring a Western solution such as the Eurofighter Typhoon or Saab Gripen NG is slim. Russian platforms, such as the Su-35 and MiG-35, can at best characterized as uncertain, though it appears that Pakistan is interested in studying its options in Moscow. With the Lockheed Martin F-16 still being a wild card of sorts, the PAF’s off-the-shelf purchase (if pursued) will likely come from China. In this respect, a late-model Chengdu Aircraft Industry Group (CAIG) J-10 – i.e. J-10B or J-10C – would be something of interest to the PAF.

Prior to 2009, the PAF was slotted as a likely launch customer for the J-10 – or FC-20 as branded by AVIC. In the defence observer community, it was widely believed that the PAF would be procuring the J-10B, which was a markedly improved variant of the fighter, though in the prototype stage. A mix of economic issues and a decision to capitalize upon the F-16C/D Block-52+ fleet, the PAF opted to walk away from the J-10. Furthermore, it did not appear as though China had even cleared the J-10B for export (as per British aviation journalist and leading PAF observer Alan Warnes).

China’s reluctance to clear the J-10B-series (which includes the J-10C) for export could be a result of its unwillingness to part with its newest subsystem work, such as the J-10B’s radar or electronic warfare (EW) and electronic countermeasures (ECM) technology.

That reluctance may still be present, but AVIC did claim that it could develop export-grade equivalents for use on the FC-31; in this sense, there may be an option for the PAF to separately fund the development of an AESA radar and accompanying ECM/EW suite for use on the J-10 and JF-17. A plausible – but very remote – alternative would be to procure the J-10 in an empty configuration (i.e. airframe and engine only), and opt for a third-party radar and ECM/EW suite.

In any case, the PAF’s objective with regards to the J-10 would be to secure the supply of an AESA radar-equipped fighter before the end of this decade. In fact, the medium-weight profile of the J-10-series, while technically redundant on paper in light of the F-16, would offer practical benefits to the PAF in light of its operational reality. For example, the PAF cannot freely configure and equip the F-16s with non-American munitions. In light of the fact that there is an increasingly large market of sound air-to-surface munitions, this limitation on the F-16 makes it an inflexible platform, and that – at the minimum – withholds the PAF from utilizing its assets to their full possible effect. In contrast, the PAF could freely configure the

In light of the fact that there is an increasingly large market of sound air-to-surface munitions, this limitation on the F-16 makes it an inflexible platform, and that – at the minimum – withholds the PAF from utilizing its assets to their full possible effect. In contrast, the PAF could freely configure the Ra’ad air-launched cruise missile, H-2 and H-4 stand-off range glide-bombs, C-802 anti-ship missile, and other munitions to the J-10.

In absolute terms, this would not be a low-cost initiative, but at this stage, Beijing appears to be the only party willing to extend flexible financing and credit to Pakistan for defence purchases. One can simply point towards the recent submarine order as evidence for this point. However, in light of the alternatives, especially in Western Europe, a purchase of a J-10B-derived fighter would be prudent on its own terms. China has a strategic interest in having a militarily strong Pakistan to help hamper India, which the U.S. is increasingly counting on to help contain China. In this respect, the issue of pre and post-conflict supplies and platform access (to configure the fighter at will) would not be an obstacle.