India’s second Project 15B destroyer to be launched on Saturday
February 23, 2020 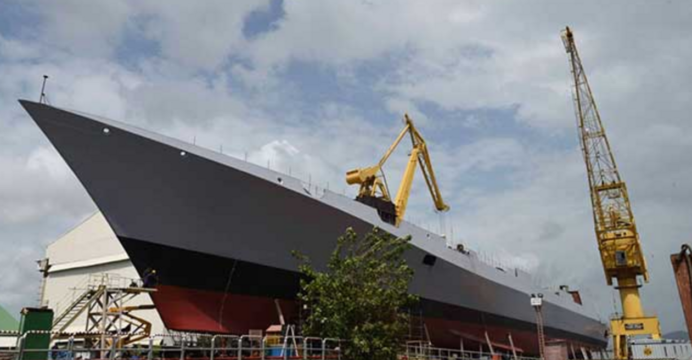 India’s second Project 15B destroyer to be launched on Saturday

The Indian Navy’s second Visakhapatnam-class (Project 15B) destroyer, the Mormugao, is scheduled to be launched for sea trials this coming Saturday (17 September).

The Mormugao is being built by Mazagon Dock Shipbuilders Limited (MDL), which was also contracted to build the Indian Navy’s forthcoming Kalvari-class (i.e. Scorpene-class) submarines, which were ordered from France’s DCNS.

Project 15B is the latest iteration of the Project 15 – i.e. Delhi-class – destroyer program, which had begun in the late 1990s. The objective of the Delhi-class destroyer was to arm the Indian Navy with a robust and capable multi-mission surface warship, which was reflected in the platform’s eventual armament, which is centered on 16 Kh-35 anti-ship missiles (via quad-cell launchers) as well as a credible short and medium-range air defence system (alongside a standard 100mm main gun and other weapons).

However, the Indian Navy opted to heavily redesign the Project 15, and the result was the Kolkata-class – or Project 15A. The Kolkata-class was designed with a strong emphasis on low radar cross-section (RCS) principles, which make for reduced radar, acoustic and infrared (i.e. heat) signatures.

In addition, the Kolkata-class would begin life carrying a number of domestically sourced weapon systems, most notably the Brahmos supersonic anti-ship/surface-to-surface missile and Barak-8 medium/long-range surface-to-air missile system. This is in sharp contrast to the preceding Delhi-class, which was armed with Russian anti-air and anti-ship munitions.

The Project 15B is an iterative update of the Kolkata-class, more so than what the Kolkata-class was to the Delhi-class (which was a more significant shift). That said, the Project 15B-line of ships will see further improvements in RCS reduction as well as offensive capabilities, especially with the eventual inclusion of the Nirbhay land-attack cruise missile. The Project 15B’s lead ship, the Visakhapatnam, was launched in April of last year.