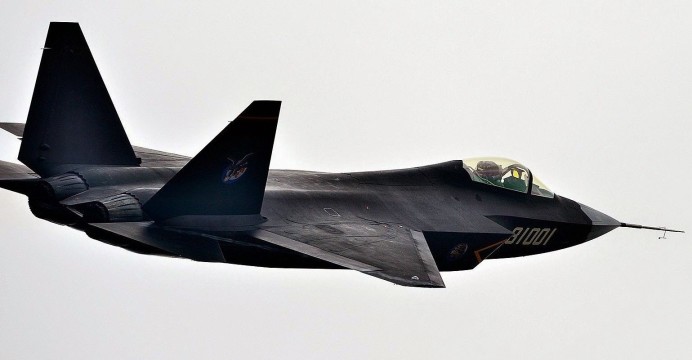 The Shenyang J-31 Gyrfalcon is one of China's two next-generation fighter programs. According to Jane's Pakistan reportedly expressed interest in 36-40 FC-31, the export variant of the J-31 Gyrfalcon.
Daily Views
Sep 14, 2016 Bilal Khan -

Two years ago the Shenyang J-31 Gyrfalcon made its official public debut at the Zhuhai Air Show. Marketed as a technology demonstrator to showcase the Chinese aerospace industry’s capacity to develop a next-generation multi-role fighter, the J-31 drew considerable attention for its similarities with the Lockheed Martin F-35 Lightning II and F/A-22 Raptor and the potential it had in arming a wide range of countries with credible – but relatively affordable – next-generation fighters.

Granted, there were a number criticisms regarding the J-31’s debut public flight (e.g. issues surrounding its maneuverability), but the J-31 shown was still an early stage technology demonstrator. In fact, the J-31 program was wholly funded by Shenyang Aircraft Corporation (SAC) – i.e. without support or directives from the People Liberation Army Air Force (PLAAF), which had chosen the Chengdu J-20 as its principal next-generation fighter platform. That said, it would be disingenuous to suggest that the platform would not undergo change and improvement in the course of its continued development, especially for an export customer, which was expected to rise in the subsequent months.

Interestingly, that customer did not emerge. At the Dubai Air Show in November 2015 (i.e. one year after the J-31’s debut), Aviation Industry Corporation of China (AVIC) engaged in a notably stronger marketing push for the FC-31 (the export designation of the J-31). AVIC officials at the time had noted that talks for selling the J-31 to the PLAAF were underway, but they had also promised that the final FC-31 design will incorporate changes and improvements over the J-31 demonstrator.

With the 2016 Zhuhai Airshow in November approaching, AVIC has yet to secure – at least officially – a partner and customer for the FC-31. Even the Pakistan Air Force (PAF), which has not only been a traditional buyer of Chinese fighter aircraft but also a co-development partner of the Chengdu FC-1 lightweight multi-role fighter, has yet to officially comment on the FC-31. In fact, when the PAF Chief of Air Staff (CAS) last commented on the issue of next-generation fighters, he spoke in generalities, namely in terms of the need to conceptualize a proper solution, but with the aim (continuing from the JF-17) to enhance the capacity of the Pakistani defence industry to be the source of the platform. China – much less the FC-31 – was not mentioned (in the context of a next-generation fighter).

It is no secret that AVIC’s main market would comprise of countries that are unable to access the latest in Western aerospace technology. For China (and Russia), this has been a key market for decades, enabling its vendors (particularly Chengdu Aircraft Corporation) to make valuable inroads in Asia and Africa. But unlike the CAC F-7 or FC-20 (J-10A), the FC-31 does not yet benefit from a development partner and initial customer with sufficient scale to distribute the development overhead.

Despite its challenges in penetrating the export market, the FC-1 (i.e. JF-17) was at least co-funded by Pakistan and is currently on-track to becoming the mainstay fighter of the PAF. While the scale is not as large as what it could have been had the PLAAF also procured the fighter, it is still large (150 with potential follow-on orders of future variants). The J-10A, despite being a sophisticated program with its fair share of development issues, still had the immense scale of the PLAAF to diffuse its development overhead. It is the same for the Hongdu L-15 lead-in fighter trainer.

The FC-31 does not have such support at this time. As the question of a simple off-the-shelf purchase is not yet applicable (as it is with the JF-17 or FC-20), the pool of potential takers is much thinner. Besides Pakistan, only Iran and – very remotely – Egypt or Iraq would be AVIC’s prospective co-funding partners. Egypt is already committed to big-ticket purchases from France and Russia, and Iraq has not signaled any intention towards next-generation fighter platforms (though it has become one of China’s armed drone clients). Pakistan and Iran are the leading takers, though the latter will probably gauge its Chinese options with Russian alternatives.

Pakistan is an interesting case. Despite the recent news surrounding Turkey’s reported interest in having Pakistan participate in the TFX program in some shape or form, the fact – at the end of the day – is that China is one of Pakistan’s principal vendors of high-tech equipment. If one removes the U.S., then China is essentially the only supplier (of any significance). That said, this does not mean that the FC-31 would be selected by the PAF.

Firstly, the PAF does not have a relationship (at least in terms of recent years) with SAC, but rather, it has strong working ties with CAC (with whom it had developed the JF-17). Furthermore, the lack of support or scale from the PLA is something the PAF will be keeping in mind considering that Pakistan has a limited fiscal capacity, and as such, it would be very difficult to manage risk and difficulties without another scale partner to help absorb costs. Secondly, the tone of the PAF on the subject of next-generation fighters appears to be one of trying to come up with a solution that is derived from its own requirements, as opposed to trying to adapt an existing design. Ultimately, China would likely remain as Pakistan’s principal partner, but that does not necessarily mean SAC or the J-31 will be the PAF’s next generation platform.

There may be a silver lining for SAC in that the PLAN has apparently yet to decide on its next-generation platform, especially for use on its forthcoming aircraft carriers. Through the J-11 and its variants, Shenyang has a very strong relationship with the PLAN. Its complete entry into the program and commitment to a significant number of jets would change the situation for the FC-31. Alternatively, the Chinese government itself could perhaps consider the FC-31 as its high-value export driver and back the program on that basis alone (ensuring that it is developed and produced).

The latter idea is not far-fetched considering that Beijing has been seeking to make lucrative inroads in the global arms market, success in which would enable China to export high-value aircraft with years of after sale opportunities (e.g. maintenance, repair and overhaul, upgrades, etc). The Chinese could consider the FC-31 an investment for the long-term.