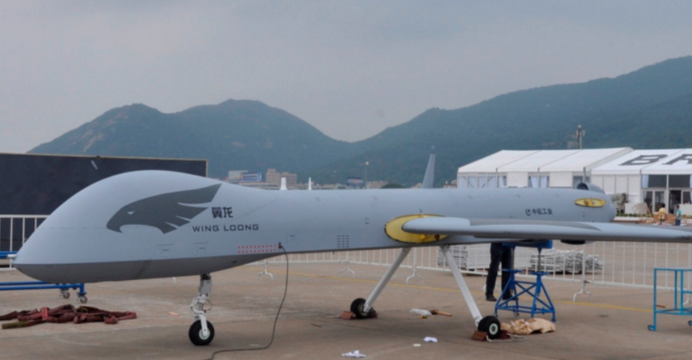 Its current iteration, the Wing Loong II, was unveiled in September 2015 (IHS Jane’s). Although the Wing Loong II shares aesthetic similarities with the General Atomics MQ-9 Reaper, it does not possess the same range and payload capacity as its American counterpart.

Analysts, such as Richard D. Fisher Jr of IHS Jane’s, noted that the Wing Loong II’s less capable engine is likely the main cause for the capability gap.

If this news is accurate, this may not be Saudi Arabia’s first Wing Loong order. In 2014, the Taiwanese media outlet Want China Times reported that Riyadh had ordered a number of Wing Loong MALE UAVs. The deal was not officially acknowledged, but analysts from IHS Jane’s as well as Defense News slotted Saudi Arabia as a Wing Loong user. In effect, it is possible that Saudi Arabia already has experience in using the Wing Loong-series, potentially even in live combat.

Since 2011, China has made strong in-roads in the armed UAV market. The primary driver of its success has been the U.S.’s reluctance to release its own armed drone systems (e.g. the Predator) to military users in the Middle East, Africa and South Asia. As a result, prominent military clients – namely the United Arab Emirates, Saudi Arabia, Pakistan, Nigeria and potentially others – had looked to China for viable options.

In fact, the demand not only helped CAIG, but it also paved the way for CAIG’s industry rival, the China Aerospace Science and Technology Corporation (CASC), to make in-roads as well. CASC’s CH-3/3A and CH-4 armed-UAV designs are in use in a number of key markets, including Pakistan (CH-3A), Nigeria (CH-3/A), the UAE (CH-4) and even Iraq (CH-4). Meanwhile, the CAIG Wing Loong had secured sales from Kazakhstan and reportedly even Egypt. The Wing Loong was also being tested in Pakistan as recently as June.

Currently, export users would operate the Wing Loong (as well as other Chinese armed UAVs) using radio-based line-of-sight methods. While this limits the range of the UAV (barring it from over-the-horizon use), the reality that these drones are often used within the territories of their users renders this limitation as a non-factor. Ultimately, the Wing Loong is still capable of utilizing modern precision-strike methods (e.g. electro-optical/laser guidance) and munitions (e.g. laser-guided missiles and bombs). In turn, its users are imbued with valuable tactical capabilities, especially for their respective counterinsurgency operations.