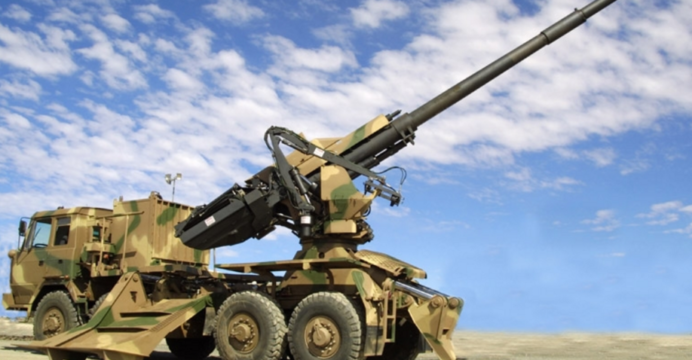 For example, Denel announced that the G5-T52, which is a G5 gun mounted onto an 8×8 truck provided by the Czech vendor Tatra is being tested in an undisclosed foreign country (with positive results). Furthermore, an unnamed state in the Middle East is actively interesting in acquiring the G6 SPH, with two potential deals being close to fruition.

Although the M777 and AH4 are 155mm designs, Denel is pushing the G7 as a worthwhile lightweight artillery solution in its own right. Defence Web described it as a gun with the “logistics footprint of a 105 mm howitzer but the range and terminal performance of a 155 mm system.”

As discussed in an earlier article on Quwa, lightweight artillery systems of this nature enable armies to field strong offensive power without being beset by severe logistical challenges. To put it into perspective, the Denel G7 could theoretically be carried by a Mi-171 utility helicopter via an external sling (assuming Army-Technology’s report of the Mi-171’s external payload being 4,000kg is correct).

Purely an example, but Pakistan could rapidly field artillery positions in its mountainous regions through the use of aviation assets such as the utility helicopters present in its fleet. If LEO development continues, there may even come a howitzer that is lighter than 3,000kg (Engineering News).

For Denel, the LEO’s entry into the world artillery market, especially with a co-development partner as well as large initial customer, would be ideal. In this respect, there is an opportunity for the company to scale and potentially offer a solution that is competitive in cost and performance to the likes of the AH4 and M777, respectively.

In addition, there is a vertical integration opportunity in that LEO customers could also procure artillery munitions, including base bleed shells capable of reaching 30km, from Rheinmetall Denel Munition. It could also draw upon the competencies of Denel Land Systems and Paramount Group to develop new self-propelled howitzer solutions using the LEO.