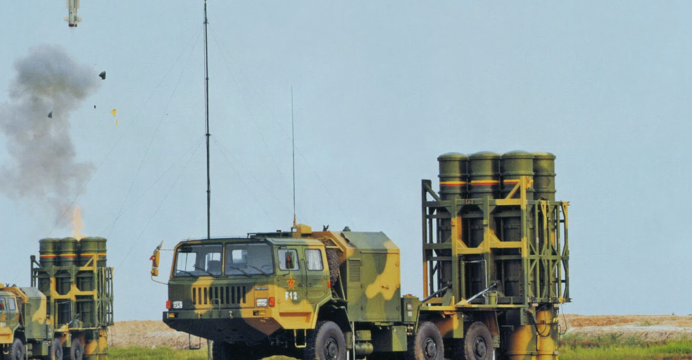 In its most recent annual publication, the Pakistan Ministry of Defence Production (MoDP) disclosed that the armed forces had procured six LY-80 (i.e. HQ-16) surface-to-air missile (SAM) systems from China for $373 million U.S. in fiscal year 2014-2015.

The HQ-16 missile itself carries a 70kg warhead and is guided by a semi-active radar-homing (SARH) seeker (which will work in conjunction with the SAM system’s tracking and guidance radar). The missile is also used as a vertically-launched naval SAM in the People’s Liberation Army Navy (PLAN).

It is not clear how many launchers are included within each HQ-16 system. Numerous web sources have suggested that each HQ-16 system (with an IBIS-150 radar) comprises of twelve launchers divided into three batteries (as shown in an illustration provided by Army Recognition), but no official information on this issue is readily available.

If an IBIS-150 radar is an indication of an HQ-16 system, then Pakistan could be ordering up to 108 launchers. However, systems need not be as large as 12 launchers, Pakistan could potentially be deploying system with varying numbers of launchers. It is not known if there will be systems with 12 launchers (or conversely, less than 12 launchers). In any case, the HQ-16 is clearly on-track to forming the medium-range layer of Pakistan’s land-based integrated air defence system (IADS).

It is worth noting that the above-mentioned information is based on the activities of fiscal year 2014-2015, and not the current year. This is an important consideration because another air defence system deal was reportedly on the table in May 2016. Specifics were not given, but it would be safe to assume that this new contract would involve the HQ-16 and/or short-range HQ-7 (in use by the Pakistan Army), though one could speculate that this new deal is in reference to the HQ-9 long-range SAM system.