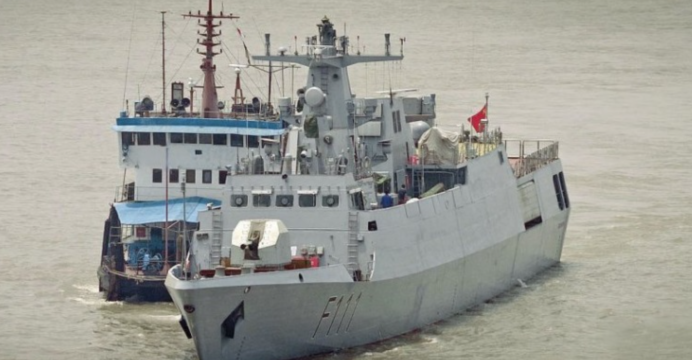 Produced by the China Shipbuilding & Offshore International Company (CSOC), the C13B is a custom-built variant of the Type 056, which is now the mainstay of the People Liberation Army Navy (PLAN)’s corvette fleet (with close to thirty vessels now in PLAN service).

While derived from the same hull design, the C13B has a lighter displacement than the Type 056 (1,330 tons versus 1,500 tons). The C13B also eschews the Type 056’s anti-submarine warfare (ASW) capabilities and helicopter hangar, though it is still equipped with an aft landing and take-off pad.

The C13B also retains a number of the Type 056’s core capabilities and systems. According to Navy Recognition, the C13Bs are equipped with two dual C-802 anti-ship missile (AShM) launchers (for a total of four AShM), one FL-3000N point-defence missile system (PDMS), one 76mm main gun, and two 30mm remote-controlled naval turrets.

In addition to the corvettes, Admiral Nizamuddin Ahmed also informed the media (in June 2016) that the two retrofitted Type 035G diesel-electric submarines on order from China will be delivered by the end of 2016.