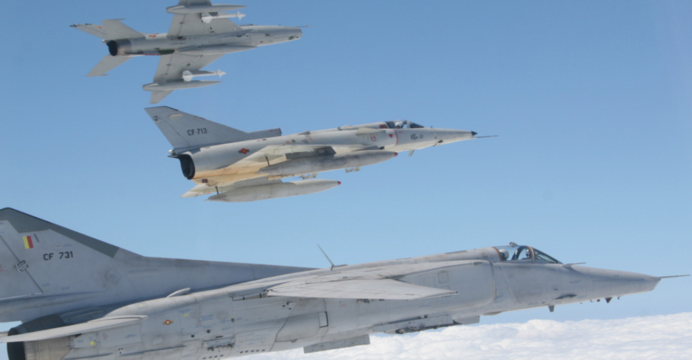 According to a number of Sri Lankan news media outlets, the Government of Sri Lanka has greenlit the Sri Lanka Air Force (SLAF)’s request for a squadron – potentially eight to twelve – new multi-role fighter aircraft (Colombo Gazette and Daily News).

In effect, the Sri Lankan Air Force is not only looking to modernize its fleet, but it is essentially in the process of re-building its fighter force, which is now held by a lone IAI Kfir.

In January 2016, it was reported on a number of media outulets that Pakistan made a strong push to sell eight JF-17 Thunder lightweight multi-role fighters to Sri Lanka, which are jointly produced by Pakistan Aeronautical Complex (PAC) and China National Aero-Technology Import and Export Corporation (CATIC).

However, no such deal was made. The purported reasons for the sale’s collapse range from New Delhi’s alleged pressure on Sri Jayawardenepura Kotte, to Pakistan’s inability offer a credit or financing program to back the deal. In any case, Pakistan did not secure a JF-17 sale at that time.

In May 2016, a Sri Lankan media outlet had reported that the SLAF was in touch with Russia over the possible purchase of Russian fighter aircraft. While no details were offered into the make or type, an article on Quwa speculated that the Yakovlev Yak-130, a lead-in fighter trainer (LIFT) capable of taking on air combat roles (albeit with a reconfiguration) could be the forerunner.

Pakistan may renew (or continue) its push to sell the JF-17 to Sri Lanka. It is no secret that Pakistan – and especially the Pakistan Air Force (PAF) – has been making efforts to commercially market the Thunder, with an offer recently made to Kuwait. Some even viewed the PAF air chief’s recent visit to Sri Lanka – on invitation of the SLAF – in that light as well.

Pakistan’s challenges in selling the JF-17 – in general and specifically to Sri Lanka – have been discussed on numerous occasions on Quwa (see articles here). From Sri Lanka’s perspective, it would likely be best to secure a single supplier responsible for the entirety of the aircraft, its long-term maintenance support, and its financing. In that light, Russia could have an advantage (assuming it is willing to release a line-of-credit or loan to back a SLAF deal). Alternatively, China could also make an offer, which may widen the door for the JF-17 (though the Thunder would likely need to compete with the Hongdu L-15).

On the other hand, PAC (and by extension the PAF) may attempt to broaden the JF-17’s appeal by linking the fighter to ancillary benefits, such as access to PAF training facilities. For example, the SLAF could pair its conversion to the JF-17 with the PAF’s relatively up-to-date (via exposure from air exercises such as Red Flag and Anatolian Eagle) instructors and programs.

In addition, the counterinsurgency-focused Airpower Centre of Excellence (ACE) could be a relevant factor as well, enabling the SLAF to not only gain from ACE’s programs (borne from real-world combat experience in the Federally Administered Tribal Areas), but be also be a recognized contributor (via its efforts against the Liberation Tigers of Tamil Eelam).

Granted, this would be a very unconventional approach, but an appeal to a relevant and comprehensive training program to go along with a combat solution could raise the JF-17’s value. One can only expect as much from a marketing message that emphasizes the PAF’s hand in developing and producing the JF-17. In other words, there is not much of a separation between PAC and the PAF, even at the surface level.

In any case, with Sri Lanka only now committing to its intentions for new fighter aircraft, it will be some time – at least months – before concrete steps are made towards selecting a platform.