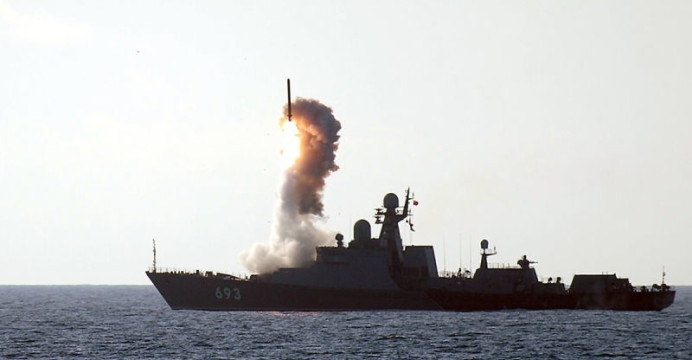 In its latest annual publication, the Pakistan Ministry of Defence Production (MoDP) disclosed that the Directorate General of Munitions Production (DGMP) was tasked with “the indigenous developing of [one] ship-borne system with [one] Land Attack Missile and [one] Anti ship Missile.” Development of this system is scheduled for completion by October 2018.

It is not clear exactly what the DGMP had been tasked with developing, but it could be an indication of a naval launch system. If it is a launcher, then it will not literally carry both an anti-ship missile (AShM) and land attack cruise missile (LACM) simultaneously, but be long and wide enough to carry either kind. In the Pakistan Navy’s case, that would mean developing a launch system compatible for the Babur LACM and C-802 AShM.

As for the purpose of this system, it is not clear if by “shipborne” the MoDP is referring to surface warships or to surface warships and submarines. Specifics of this program notwithstanding, it is certain that the Pakistan Navy is seeking to build a deterrence capability, and submarines – such as the eight ships recently ordered from China – will serve a central role in that regard. One could reasonably speculate that DGMP’s naval program could be in reference to the Pakistan Navy’s forthcoming submarines.

The alternative idea would be in reference to a surface warship, such as frigates and/or corvettes. While not impossible, this is unlikely to be the case. Granted, Pakistan could draw in inspiration from Russia’s method of arming relatively lightweight surface combatants – such as corvettes – with LACMs.

When it militarily entered Syria in 2015, Russia deployed its Caspian Sea Fleet to launch 3M54 Klub/Kalibr LACMs. With a displacement of less than 1000 tons, the Buyan M is capable of launching Kalibr-NK LACMs using on-board vertical launch system (VLS) cells.

It does not appear that the Pakistan Navy is planning to utilize its surface warships (the latest of which are anti-submarine warfare capable Zulfiqar-class frigates) for deterrence purposes.

The sole workhorse of the Navy’s nuclear deterrence force will likely be comprised of conventional submarines. With the purported value of its purchase from China being $4-5 billion U.S., and the inherent low-detectability and low-observability advantages of conventional submarines, one would expect to see Pakistan prioritize a sub-surface deterrence element above that of surface ships. In-house development of the launch system – torpedo tubes in the case of submarines – would comfortably align with this idea.

The October 2018 deadline will also overlap with the submarine acquisition from China. While it is not known when these submarines will enter production, it is possible, if not likely, that only a portion of the forthcoming eight submarines will be equipped for the deterrence role. The batch slotted for production in 2018 could be among those designated to carry nuclear-tipped Babur LACMs.