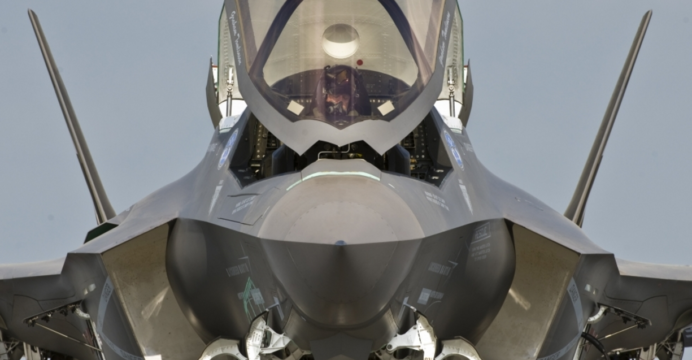 USAF F-35s are ready for combat

“The U.S. Air Force decision to make the 15 F-35As … combat ready sends a simple and powerful message to America’s friends and foes alike – the F-35 can do its mission,” said Lieutenant General Chris Bogdan, the Lightning II program’s chief.

With 15 currently in service, the U.S. Air Force intends to procure a total of 1,763 F-35As. The U.S. Marine Corps is planning to acquire 340 F-35Bs and 80 F-35Cs, and the U.S. Navy is seeking 260 F-35Cs. In addition, the Lightning II will see orders from 10 overseas partners: Britain, Australia, Norway, Italy, Turkey, Israel, the Netherlands, Denmark, South Korea and Japan.

In light of recent controversies surrounding the Lightning II’s costs and technical viability, it would be easy to erroneously dismiss the fighter’s value.

In reality, there are scarcely any fighters on the market today that can compete with the F-35 Lightning II in terms of its sensor and electronics warfare (EW) suite (and the sensor fusion between these systems). Combined with its low radar cross-section (RCS) – i.e. stealthy airframe – the Lightning II is a solid package.

The U.S. and the F-35’s other uses will position the fighter as a core strike asset. Paired with a range of precision-guided air-to-surface munitions, the Lightning II will be used to lead pre-emptive and high-risk air strikes, especially against high-value targets.

Countermeasures against the Lightning II – and other low-RCS fighters – will center on very high-frequency (VHF) and infrared-based sensors, which will proliferate in the defence market in the coming years. VHF can be delivered through active electronically-scanned array (AESA) radars, which could collectively (at least in theory) provide credible ‘stealth detection’ and EW protection.

Major military powers will strive to acquire low-RCS fighters and advanced sensors in parallel, so as to raise their offensive and defensive capabilities in unison. For example, Russia and China are aggressively developing stealth combat aircraft and anti-stealth sensors. It will be worth seeing how the U.S.’ vision of a future where both become common (especially in Asia and the Middle East) will materialize.

Of course, standalone assets – such as the F-35 – are merely one aspect of a complete defence system. The U.S. has a battery of very capable assets to offer the F-35 protection and extensibility in almost any combat environment; its opponents will not simply face the F-35 (or any other asset) alone. That said, the F-35 was still envisaged to fulfill a role, and with strike (for the present and future) being a key objective, the proliferation of ‘anti-stealth’ measures could deprecate the U.S.’ ability to strike targets in hostile territory.