NORINCO is ready to produce the AH4 lightweight howitzer
February 18, 2020 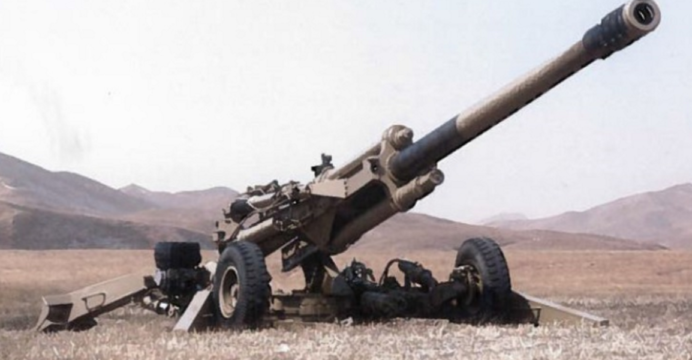 NORINCO is ready to produce the AH4 lightweight howitzer

The AH4 is basically China’s counterpart to the increasingly popular BAE Systems M777, a lightweight artillery system currently in use by the U.S., U.K., Canada, Australia and – in the near future – India.

According to IHS Jane’s, the AH4 is capable of firing guided munitions, such as laser-guided projectiles (e.g. GP6). The AH4 was also marketed for export on numerous occasions.

While the NORINCO AH4 is in its infancy as a program, China’s possession of a lightweight platform cannot be understated. As the AH4 line matures, the People Liberation Army (PLA) and Chinese defence industry will be among a handful of players in the world capable of fielding lightweight 155mm howitzers.

In the past, lightweight artillery applications made use of smaller shells (e.g. 105mm and 85mm) in order to achieve the weight parameters necessary for aerial lift or easy mobility, which is essential for use in less accessible battlefields, such as mountainous areas.

With the M777, Pegasus (Singapore) and AH4, countries now have the option to bring heavier shells to areas where it was previously not feasible, and in turn, elevate the offensive pressure.

While India is procuring the M777, it is unclear if Pakistan would opt for the AH4 in response. The value of the AH4 rests in its lightweight nature, but to make use of it, one still needs assets capable of lifting a 4500kg gun piece. Pakistan does possess fixed-wing transports such as the C-130 and CN-235, but for rapid field deployment and use, a helicopter capable of pulling the AH4 is necessary.

Pakistan does not have such an aircraft, though it did show interest in acquiring surplus CH-47 from Italy in 2011-2012. It is likely a requirement for heavy-lift helicopters exists. Pakistan was especially pleased at the CH-47’s performance during the aftermath of the 2005 Kashmir Earthquake. Should the Pakistan Army acquire heavy-lift helicopters, either in the form of surplus CH-47 or an alternative (e.g. the Russian Mi-26 or Sino-Russian ALH), the AH4 would be a natural addition.

Pakistan could also consider using the AH4 as a self-propelled solution. This could be done by binding the gun to a truck or wheeled armoured personnel carrier. It is not clear how much use Pakistan would have for such a system, but given the increasing presence of roads in the region as well as potential long-term tensions on its Western front, a lightweight self-propelled howitzer could be of interest to the Army.