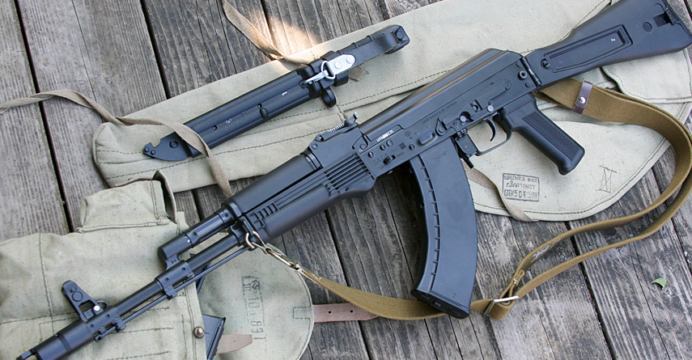 Has the Pakistan Army selected the AK-103?

According to the Russian News Agency TASS (via Army Recognition), the Pakistan Army is planning to order a large number of Kalashnikov AK-103 assault rifles from Russia.

The information was given to TASS by a Pakistan Ministry of Defence (MoD) official at Eurosatory 2016, a major defence exhibition that took place last week in Paris.

According to the MoD source who spoke to TASS, the AK-103s are being bought because “they can be used in the country’s hot weather conditions.”

The source also told TASS that the Pakistani armed forces intend to acquire up to a million new rifles for the purpose of fully re-equipping the country’s infantry. However, the source did not confirm the extent to which the AK-103 will service this need, thus leaving the room for another rifle to be procured.

The Pakistan Army semi-officially disclosed its program to acquire a new widely issued rifle in March. At the time, the AK-103 was among a group of competitors which had included FN Herstal (SCAR H), Česká Zbrojovka (CZ-806 BREN 2), Zastava (M77), and Beretta (ARX-200).

Although an older design (in comparison to its competitors), the AK-103 offers marked improvements over the Type 56, such as incorporating a picatinny rail in the design, thus enabling it to be ready for sights and other rifle add-ons. Moreover, the transition period to have Army personnel transitioned to the AK-103 (from Type 56) should be minimal, thus making the rifle’s entry into a combat environment relatively prompt.

Besides the reported selection of the AK-103, the status of the other entrants has not been disclosed via official channels. Looking at the statements given to TASS by the Pakistani MoD official, it is possible that another rifle will be chosen, especially if the AK-103 is to be a replacement for the Type 56, which is what Pakistan Army infantry mostly use in the Federally Administered Tribal Areas.

In this case, a replacement for the Heckler & Koch (HK) G3 battle rifle would emerge in the form of a 7.62x51mm NATO calibre rifle. In terms of the group from March, this could include the Zastava M77, Beretta ARX-200 and FN SCAR H, but there is nothing to preclude the Army to include other competitors, such as the HK-417 and MKEK MPT-76. In fact, one could argue that these rifles ought to stand a higher chance given that they are derived (or at least draw a relatively high proportion of parts) from the widely adopted AR-15 platform.