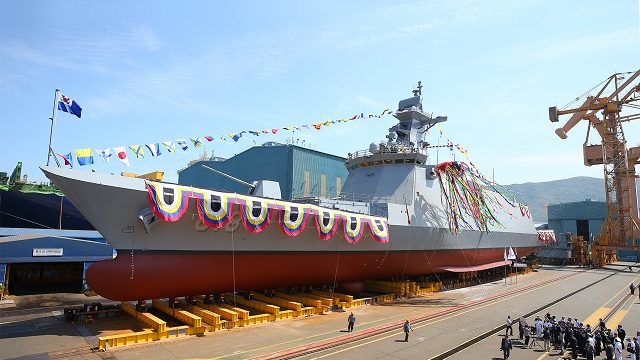 The Daegu-class/FFX-II is a 3600-ton (full-load) frigate capable of anti-ship (AShW), anti-submarine (ASW), and anti-air (AAW) warfare. It is an enlarged and improved variant of the Incheon (FFX-I)-class frigate, which currently operates as an ASW and general patrol frigate in the Republic of Korea (RoK) Navy. The FFX-II has a crew of 120 personnel and is capable of reaching a maximum speed of 30kt (55.6km/h).

According to IHS Jane’s, the contract for the second Daegu-class frigate is expected to be awarded to DSME by the end of this year. As per Naval Recognition, the RoK Navy could acquire up to eight of these frigates.

The Daegu-class/FFX-II is a good example of a balanced 3500-4000-ton multi-mission frigate design. Of particular interest is the FFX-II’s vertical launch system (VLS), which is being supplied by South Korea itself. It is possible – if not likely – that the KVLS will house South Korea’s missile designs; the Cheolmae-2 medium-range surface-to-air missile (SAM) and Haeseong-series of anti-ship missiles (AShM).

Daewoo Shipbuilding & Marine Engineering (DSME) has made in-roads in the Pacific Asia market as well, having secured frigate and submarine contracts from Thailand and Indonesia, respectively. It will be worth seeing if South Korea positions the FFX-II for export in the coming years, or whether it will offer a version without potentially sensitive third-party technology (such as the hybrid electric drive system bought from Finmeccanica-Leonardo, formerly DRS Technologies).