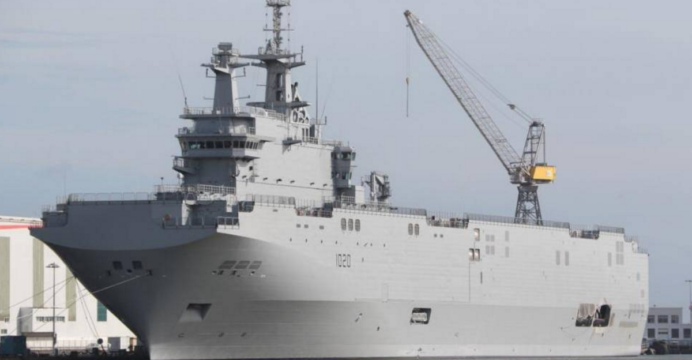 The Egyptian Navy has received the first of two Mistral-class landing helicopter dock (LHD) – also known as helicopter carriers – from France. Named the ENS Gamal Abdel Nasser, the LHD was originally meant for Russia, but a string of geo-political problems relating to Ukraine and Crimea resulted in the original deal between Moscow and France to collapse.

As part of its wider military modernization program, Egypt picked up the Mistrals, ostensibly to enhance its amphibious landing and expeditionary capabilities. Cairo also ordered 46 Ka-52K attack helicopters from Russia, these will help form the aviation arm of its newly acquired LHDs.

While Egypt’s desire to modernize its armed forces is fully understood, Cairo’s acquisition of the Mistral is unclear. The Mistral is a highly promising assault asset meant for power projection and expeditions, something that Egypt has not signalled in terms of its foreign relations or geo-strategic security policies.

Granted, there is speculation that Egypt could use the Mistrals to support its coalition allies in Yemen, but an operation of that nature ought to necessitate a lead-up of preparation (e.g. exercises, setting-up an overseas support network, etc). It is an open question mark at this point.

The second issue is the question of funding. The Mistral LHDs, the Rafale multi-role fighters, the Gowind light frigates, and more, would indicate that Egypt’s current and future fiscal capacities are sound. In fact, French banks are even issuing loans to help Egypt fund the purchase, these are underwritten by the French government. But the reality of the Egyptian economy is not that rosy.

Even if we were to accept that Egypt’s economy is improving, the scale of improvement does not mean the French (or any other creditor) would automatically back large armament purchases. It is for this reason that some believe that Saudi or Gulf military aid is – at least in part – behind the big-ticket acquisitions. If not as direct financial contributors, then as shadow guarantors.