Indonesia is interested in Kilo-class submarines from Russia
February 18, 2020 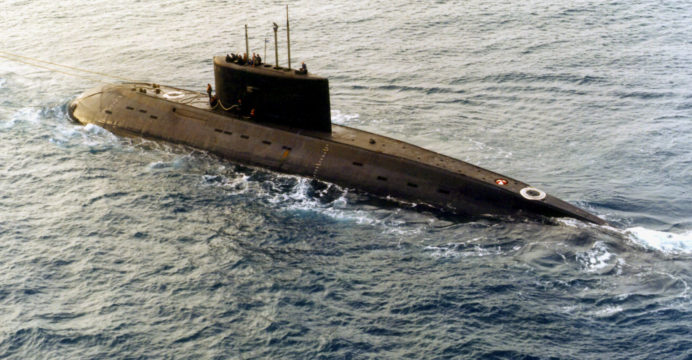 A Russian-built, Kilo-class diesel submarine recently purchased by Iran, is towed by a support vessel in this photograph taken in the central Mediterranean Sea during the week of December 23. The submarine and the support ship arrived at Port Said, Egypt, on Tuesday and were expected to begin transiting the Suez Canal today, Jan. 2, 1996. Ships and aircraft from the U.S. Navy's Sixth Fleet are tracking the submarine, which has been making the transit on the surface. This is the third Kilo-class submarine the Iranians have purchased from Moscow. DoD photo
Country PortfolioAsia Pacific
Jun 1, 2016 Bilal Khan -

Supriyadi informed TASS that “Russian specialists will be invited to Indonesia” to initiate the process of a possible acquisition, not only of submarines, but potentially other equipment as well.

The Kilo-class is a diesel-electric submarine (SSK) meant to engage in anti-ship warfare (AShW) and anti-submarine (ASW) operations in shallow waters. Essentially a contemporary of the popular the German Type 209 (and less widely adopted French Agosta), the Kilo has seen fairly widespread adoption – with China, India and Vietnam as some of its leading export users.

Its current iteration, the Project 636 Varshavyanka, is an improved variant which is both less detectable and longer range in its reach. Like its predecessor, it can be armed with anti-ship missiles (AShM) as well as ASW torpedoes. If acquired, these will join three new Type 209 SSKs being built for Indonesia by South Korea’s Daewoo Shipbuilding & Marine Engineering.

Indonesia has traditionally maintained both Western and Eastern equipment in its inventory. For example, the Indonesian Air Force operates F-16s alongside the Sukhoi Flanker, and it is currently pegged as a likely buyer of the Su-35, Russia’s latest multi-role fighter on offer in the market. In addition, it is a co-funding and co-development partner of the South Korean KFX, a next-generation fighter program.

This continued push to induct new Russian equipment alongside new arms of Western-origin (but built in South Korea or even locally in Indonesia) is interesting, perhaps a reflection on the part of the Indonesian military to keep its armament supply-line diverse.

The submarines in particular (alongside the country’s other naval developments) are focused on raising the country’s maritime stature. Its president, Joko Widodo, promised to position Indonesia as a “global maritime axis” during the 2014 presidential elections. It is interesting to note that Indonesia’s maritime growth is coinciding with the naval developments in Singapore, the Philippines, Vietnam, Malaysia, and Thailand. Maritime capacity growth is a regional shift encompassing ASEAN’s core members.

It is unclear what this will mean for the region. It is plausible that each of ASEAN’s core members will more closely cooperate with one another on common maritime security issues.