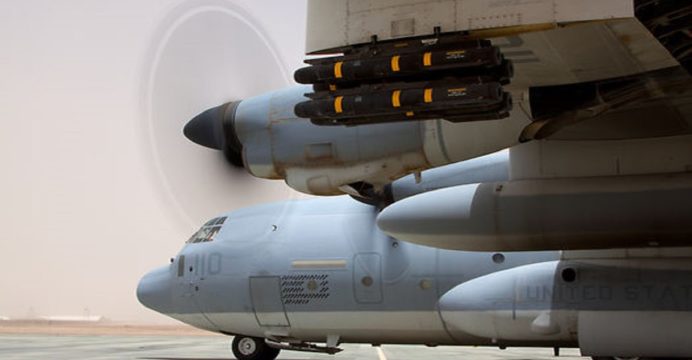 The United States Marine Corps (USMC) is considering the idea of arming all 79 of its KC-130J Super Hercules tankers with the Harvest Hercules Airborne Weapons Kit (HAWK). The HAWK is basically a solution that enables the KC-130J to operate as a close air support (CAS) gunship akin to the famous AC-130. It is commonly termed as the “Harvest Hawk.”

The Harvest Hawk’s sensor suite centers on an AN/AAQ-30 Target Sight Sensor (TSS), an electro-optical and infrared (EO/IR) sensor that serves as a laser designator/rangefinder (to support laser-guided weapons). The TSS is also equipped with a forward-looking infrared (FLIR) system, which makes it useful for nighttime operations (by offering thermal imagery and video). It can also record and transmit live video, which could be viewed by the Harvest Hawk’s crew as well as (at least theoretically) data-linked assets elsewhere. The TSS is also used by the AH-1Z Viper.

Internally, the Harvest Hawk has two display monitors as well as control consoles in its cargo area. There, the fire control officers (FCO) can operate the armed C-130’s four precision-guided air-to-ground missiles (AGM), namely the AGM-114 Hellfire II and AGM-176 Griffin. In fact, the missile launcher is the M299, which is also used on the AH-1Z. A 30mm cannon is planned as well.

The HAWK is an excellent example of scalability. The USMC sought to acquire a gunship-like CAS solution, but instead of burdening itself by funding new programs, it is re-purposing existing solutions from its other assets, such as the AH-1Z. From the AN/ALQ-30 TSS and the M299 launcher, it is apparent that the USMC was aiming to control costs (especially in terms of development) and depend on the systems it knows (via usage on other platforms). The result is the Harvest Hawk, a CAS gunship that could potentially be fielded in numbers, thus generating a high availability rate in combat, and that too for a low cost. In 2009, the cost of conversion was set at $21.3 million U.S. for one USMC KC-130J.

Outside of the U.S., Airbus Defence and Space has teamed up with ATK and the King Abdullah II Design and Development Bureau (KADDB) to convert C-295 tactical transport aircraft in the same manner as the HAWK. Granted, the specific subsystems (e.g. sensors) are different, but the general configuration seems to be very similar, i.e. relatively minimal modifications to the airframe, but enabling it to carry an EO/IR pod as well as laser-guided munitions.

Interestingly, we have not seen much adoption in the market (outside of the U.S. and Jordan) for this kind of system. Granted, neither the AC-130 or Harvest Hercules are available for export (though there is nothing sensitive in the HAWK aside from the CDL), but the AC-235 and AC-295 are available, they are export centric designs after all. Even cost should not be an issue considering it is a matter of integrating a kit that uses commercially available off-the-shelf components and systems.

Given that we have discussed Pakistan’s counterinsurgency (COIN) efforts, it may be an worthwhile idea for the Pakistan Air Force (PAF) and Pakistan Army to acquire one or two AC-235 (or perhaps even HAWK).

Instead of inducing stress on far pricier multi-role fighters (which also need to be available in case of war with another state), a dedicated gunship can enable the Pakistani Army to maintain a long-endurance surveillance and strike capability; the EO/IR pod can offer intelligence, surveillance and reconnaissance (ISR) coverage (much in the same manner as the PAF’s modified C-130s), and the laser-guided missiles and precision-guided bombs can be used against moving and fixed-targets, respectively.

Such an asset could be networked with the King Air 350 ISR and dedicated attack helicopter assets as well.

The Pakistan Army Aviation’s King Air 350s seem to be equipped with ground-moving target-indication (GMTI) synthetic aperture radars (SAR), which enable them to identify and track specific moving targets on the ground. That information could be passed to the gunship asset via data-link, thus enabling the gunship to focus on a specific area, be it in terms of ISR (e.g. a live video-feed) or suppression fire.

The gunship’s video-feed could potentially be fed to the multi-function display (MFD) on-board the AH-1Z, which could give the Viper crew better situational awareness, thus affording them discretion in terms of whether they are needed in a specific area or not. That same information could also be available to friendlies on the ground, either mission commanders present in ground control stations, or personnel in data-link equipped armoured vehicles.

There is potential value, perhaps it could be something that is thoroughly examined at the PAF’s Airpower Centre of Excellence? Besides Pakistan, there are no shortage of countries that could at least be intrigued by the idea of adopting the HAWK. Those involved in COIN, such as the UAE and Saudi Arabia, might look at it as an option to complement their COIN forces. Alternatively, NATO powers involved in the Middle East (or in France’s case, Africa) could be interested in it as well. At the end of the day, most C-130 users could look at the HAWK as a temporary need; once its mission is complete, the specific aircraft could easily be de-equipped and re-routed to its original purpose.