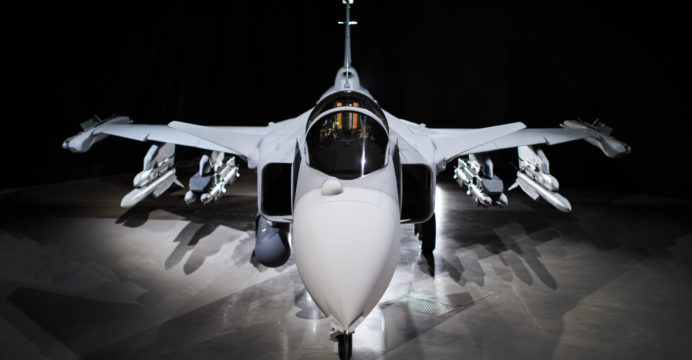 The Gripen NG program was initiated in 2013 with the aim of developing an updated Gripen variant with improvements in range and payload. In addition, the NG was sotted to carry a new active electronically-scanned array (AESA) radar (alongside an improved on-board avionics suite). It is expected that the Gripen NG, at least to start, will use the Leonardo (formally known as Finmeccanica) Raven ES-05 AESA radar. It also includes an integrated infrared search and track system (IRST).

In 2015, Brazil became the first overseas customer of the Gripen NG. Under a $4.7 billion U.S. deal, the Brazilian Air Force placed an order for 36 JAS-39E/F Gripen NG along with a maintenance and technology transfer package. Sweden has 60 Gripen NG in the pipeline for its own use.

The Gripen E prototype will conduct its maiden flight by the end of 2016. The Swedish Air Force expects to receive its first batch of Gripen NGs by 2023.

The Gripen NG design was frozen in March 2014. Although it looks similar, the Gripen NG is slightly larger than the current Gripen. This enables the Gripen NG to boast a higher number of hardpoints (nine versus the seven on the Gripen C/D) as well as room for a more powerful engine (General Electric F414) and additional internal fuel. It is basically a new airframe design.

The Saab Gripen has basically been the role model for other lightweight fighter designs. Seeing Saab invest heavily in this program and position it as a platform for the 2020s and 2030s – i.e. a time when so-called fifth-generation stealth aircraft will enter service – is a strong vote of confidence in the idea of having “non-stealth” platforms equipped with the latest on-board electronics (e.g. radar and electronic warfare and electronic countermeasure suites or EW/ECM).

On Quwa, we heavily cover news about the JF-17 Thunder. It is a good idea to consider the Gripen NG as an example of what is possible with lightweight fighter platforms. Some elements, such as the AESA radar and vastly improved EW/ECM, can strengthen the JF-17’s case as a credible defensive asset, even against individually more capable adversaries (especially if one factors in network-centric warfare support).

Compared to the current Gripen, the Gripen NG is a different beast. While an expensive system, it is still markedly more affordable than the Dassault Rafale and Eurofighter Typhoon. Air forces that cannot access or afford the likes of the F-35, Rafale and Typhoon will find a very good alternative in the Gripen NG, especially if they are accustomed with Western platforms and eager to continue flying them.