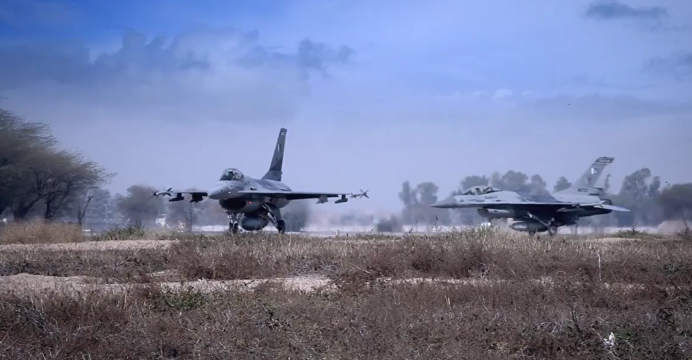 The Pakistan F-16 deal is not yet dead

Although Congress has put a block on Foreign Military Financing (FMF) support for a proposed sale of eight new-built F-16C/D Block-52 to the Pakistan Air Force (PAF), the deal â€“ or rather the idea â€“ of passing F-16s to the PAF has not completely died.

Approved in February, Lockheed Martin was to sell eight F-16s to the PAF in a deal valued at $700 million; up to $430 million was to be provided through FMF, a foreign policy tool designed to help states aligned under the U.S. to undertake specific American geo-strategic and security interests. Pakistan was to pay $270 million from its own funds. However, Congress put a block on the FMF component (on the grounds of Pakistan not apparently doing â€śenoughâ€ť to reign in on insurgents and non-state actors in its territory â€“ despite Zarb-e-Azb), thus requiring Pakistan to pay the full amount of the sale using its own funds.

Yesterday, the U.S. State Department issued a number of statements reiterating its support for using FMF to support specific Pakistani procurements. For example, a State Department official told Dawn News, â€śIt is critical that the State Department maintains the flexibility to provide assistance for Pakistan that advances US interests.â€ť That same official added, â€śWe seek aid for Pakistan because itâ€™s in our interests; it advances our broader security interests, and meets critical humanitarian and development needs.â€ť

New-built F-16s were to serve a key role in the PAFâ€™s short and medium-term modernization plans. Along with the JF-17s, the PAF was looking forward to scale its existing infrastructure to add 18 F-16C/D (i.e. eight plus another ten), which was set as an option in the agreement Pakistan signed in 2006-2007. It was apparent that the PAF was looking to build a fleet of about 100 F-16s â€“ i.e. in line with its original aims in the late 1980s, before the U.S. placed sanctions over Pakistanâ€™s nuclear weapons program.

We have discussed the technical merits of the F-16 and the PAFâ€™s alternative options in-depth, but some focus should be given towards the angle of U.S. foreign policy. Although the FMF question should have been settled by now, it seems the U.S. government is still trying to drive FMF to fruition â€“ if not today, then potentially in the near future.

Arms transfers are important foreign policy instruments for the U.S., but in Pakistanâ€™s case, they are of particularly high value in terms of the mileage they offer in incentivizing the Pakistani military to cooperate with the U.S. Yes, the Pakistani armed forces are immersed in counterinsurgency (COIN) in the Federally Administered Tribal Areas (FATA) today, but territorial integrity against external threats is a constant.

In other words, COIN is generally still viewed as a fleeting priority, but the need to defend Pakistanâ€™s borders from external threats will remain permanently. High-tech American arms (especially at subsidized costs) go a long way in supporting Pakistanâ€™s security interests in this regard, and this has been the case since the U.S. first began releasing valuable military hardware to Pakistan in the 1950s.

However, the relative value of that support has declined, especially in the past six or seven years; and to see even a handful of F-16s not be readily accessible, that is bound to raise bright red flags on the part of at least some Pakistani military planners. In Pakistanâ€™s case, not having its military planners on the same page as their American counterparts can transform into a liability over the long-term.

The armed forces are key drivers of Pakistanâ€™s security and geo-strategic policies, which the U.S. has successfully shaped a number of times, especially in the 1980s and 2000s, thanks in great part to military aid. The ramifications will not be felt in the short or even medium-term, but in the long-term, especially after a generational shift, can anyone be so confident? On the other hand, Pakistanâ€™s structural economic problems and inability to finance big-ticket acquisitions may bring it (to the U.S.) full-circle.