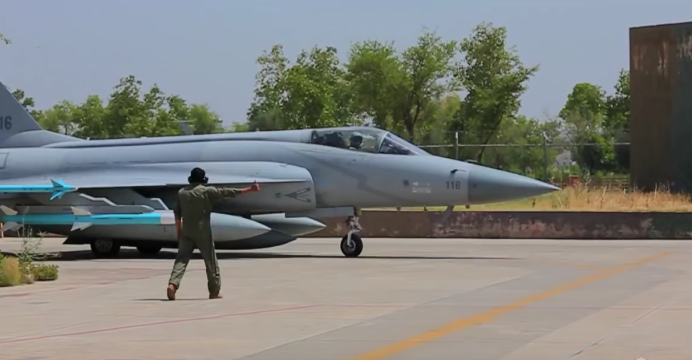 Azerbaijan invites Pakistan to showcase the JF-17 at ADEX 2016

In fact, Minister Jamalov reportedly singled out the Pakistan Aeronautical Complex (PAC) JF-17 Thunder in his comments, indicating that Azerbaijan may once again be interested in the lightweight fighter.

Reports of official Azerbaijani-Pakistani talks over the JF-17 initially emerged in 2011, but a deal evidently did not come to fruition. In January 2016, the President of Pakistan, Mamnoon Hussain, told the Pakistani media that Azerbaijan had renewed its interest in the Thunder.

While PAC and the Pakistan Air Force (PAF) pushed the JF-17 for export for a number of years, the JF-17’s watershed moment was the 2015 Paris Air Show, when it was announced that an undisclosed buyer inked an order. This customer is widely believed to be Myanmar.

Since then, PAC had begun driving momentum towards its leads, namely Nigeria and Sri Lanka, but with mixed results. Although an order of three aircraft was reportedly secured from Nigeria, Sri Lanka walked away from a possible deal for eight units.

2016 is shaping up to be a busy year for PAC. The JF-17 made a visit to Qatar in February, with PAC potentially keeping an eye on the prospect of replacing the Qatar Emiri Air Force (QEAF)’s Alpha Jets. PAC is also attending the 2016 International Marrakesh Air Show in Morocco.

The JF-17 has a reasonable chance in earning a place in the Azerbaijan Air Force (AzAF). Azerbaijan is fairly close to Turkey, though it maintains productive ties with Russia as well. In that environment, Pakistan’s chances of running into political problems as a result of a neighbour’s pressure are not as high as say the problems it evidently ran into in Sri Lanka.

Financing could be an issue, especially since Pakistan does not have mechanisms to issue loans or line-of-credit; whether China steps in remains to be seen. However, if China were to offer a financing mechanism, it could incentivize Azerbaijan to buy other Chinese goods in the future.

The air-to-surface department could be very interesting as well. Azerbaijan could select from China’s inventory, which center on the WMD-7 targeting pod and LT-line of laser-guided bombs (LGB). The JF-17 could also use the LS-3 and LS-6 GPS/INS precision-guided bombs (PGB). NORINCO even offers a stand-off range glide-bomb capable of carrying sub-munitions in the form of the GB6. The AzAF can choose from numerous anti-ship missiles (AShM) on offer as well – TL-7, C-802, C-705KD, and CM-400AKG.

Alternatively, Azerbaijan could opt to separate the acquisition of the JF-17 from its munitions. On the air-to-ground front, it could tap into its good defence ties with Turkey to acquire the ASELPOD targeting pod, SAGE TUBITAK’s HGK PGB kits and Roketsan’s Teber LGB-kits.

A key point to drive with Azerbaijan is that with the JF-17, it is free to integrate its choice of avionics and weapon systems. This is an important advantage. Not only does it provide Azerbaijan the flexibility to equip the JF-17 at will, but the JF-17 can be its primary driver to attain and maintain a qualitative edge.

Engine commonality between the JF-17 and the AzAF’s MiG-29s is another benefit, at least in terms of simplifying some maintenance overheads, whilst still being able to field distinct fighter types. An assured transition to the forthcoming JF-17 Block-III would also be key, especially in terms of cementing the JF-17 as a viable long-term solution with growth potential.

Overall, engaging with the Azerbaijani market will probably be one of the better shots PAC will have at achieving market-share. It cannot be taken for granted, but compared to Sri Lanka or some of the Balkan states, it is a much more reasonable prospect.