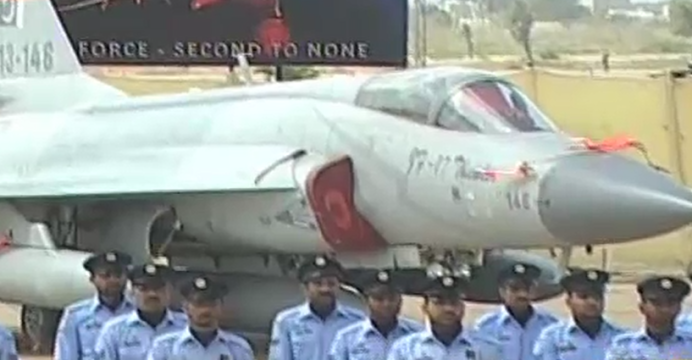 JF-17 formally handed over to the PAF’s No. 2 squadron

Defence Minister Khawaja Asif formally handed over the JF-17 Thunder to the No. 2 (“Minhas”) fighter squadron at Pakistan Air Force (PAF) Base Masroor. The squadron’s previous fighter was the Chengdu F-7P, which is a Chinese-built variant of the Russian MiG-21.

Although No. 2 had switched over to the JF-17 in September, the formal ceremony offers an opportunity to engage in a quick overview of the capability jump the JF-17 offers over the legacy F-7P. For detailed insights, be sure to review our background article on the JF-17 Thunder (here and here).

Including Combat Commanders School, the PAF now has four operational JF-17 squadrons (using a total of 66 aircraft). The induction of the JF-17 Thunder is a significant qualitative boost for Masroor Air Base and Southern Air Command.

First, the JF-17 is a markedly superior air defence fighter compared to the F-7P, particularly through its inclusion of the SD-10, an active radar-guided BVRAAM. This makes the JF-17 capable of engaging targets from a greater distance. Its close quarters element is fulfilled with the PL-5EII, a third-generation all-aspect WVRAAM.

Second, Masroor now benefits from a second anti-ship capable fighter platform. Until now, the task had been taken up by a sole Mirage 5PA squadron (No. 8) armed with French Exocet anti-ship missiles (AShM). No. 2’s JF-17s are capable of carrying Chinese C-802 AShM.

The JF-17 can utilize the KE AEW&C’s extended range air surveillance capabilities to enhance its situational awareness of the air, affording it additional time and space to react to new threats. The Mirage ROSE-I unit at Masroor is also benefitting from Link-17.

At least some of No. 2’s JF-17s were from among Block-I production units (though it is not known if they have been upgraded to Block-II). Although not among the units equipped with in-flight refuelling (IFR) probes (which is to commence mid-way through the production of the Block-II), it is likely that Masroor will be equipped with IFR-capable JF-17s in the near future.

The utility of air-to-air refuelling (via the PAF’s IL-78s) would be the most useful over the vast maritime theatre of the region. Whether this occurs via the No. 2 squadron or by replacing another unit at the air base, that remains to be seen.

During the ceremony, Air Chief Marshal (ACM) Sohail Aman expressed his hopes to ramp-up the annual production-rate of the JF-17 to 24 aircraft in 2016. It will be interesting to see what squadrons are lined up to receive the JF-17 next.