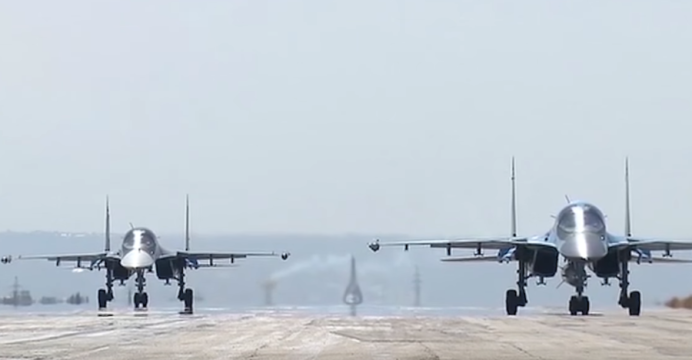 The first group of Russian combat aircraft have left Syria. According to the Russian Ministry of Defence, a batch of Sukhoi Su-34 fighter-bombers left Hmeymin Airbase near Latakia (Bashar al-Assad’s stronghold). They were joined by an Ilyushin IL-76 carrying a number of Russian troops.

Vladimir Putin, Russia’s president, made the announcement of withdrawing from Syria at the beginning of this week. In the statement, Putin said that the Russian military had achieved its objectives in Syria.

Putin cited how Russia’s air support of Syrian government forces enabled them to “profoundly reverse the situation”, especially through flipping the armed opposition’s momentum into their containment. He added that the “effective work of our military created the conditions for the start of the peace process.”

The move was considered surprising, but analysts are generally reluctant to accept Putin’s declaration as conclusive. Although his announcement followed the recall of several fighter-bombers, it is not known if this will be followed by a deadline for complete withdrawal.

The general theme in Russia’s intention to withdraw from Syria is the perception that it has succeeded in achieving its aims in the country. There is no doubt that Russian air support has played a role in containing the rebel advance, but it is unclear if one could consider the Kremlin’s objectives in Syria to be “complete.”

It was only several days ago that a Syrian Arab Air Force (SyAAF) MiG-21 was shot down by a rebel man-portable air defence system (MANPADS). While such rebel measures have not impacted the Russians, the SyAAF has had mixed success in contending with them. Not only is air support a vital operational need for al-Assad, but it is apparent that his forces are not in a position to provide it in an effective manner, at least not on their own.

Although a handful of Russian Su-34s have left, the balance of Russia’s expeditionary forces, especially its close air support units, still remain in Syria. In fact, the Russian Deputy Defence Minister, Nikolai Pankov, said, “it is too early to speak of a victory over terrorism … the air force is tasked with continuing attacks against terrorist targets.”

Given that Russia’s fixed installations in Syria, e.g. Hmeymin Airbase, will remain, it is possible that the partial withdrawal is also a cost-controlling measure, especially with the ceasefire in place. Should the situation in Syria warrant it, Russia could readily deploy fresh aerial assets to the country.