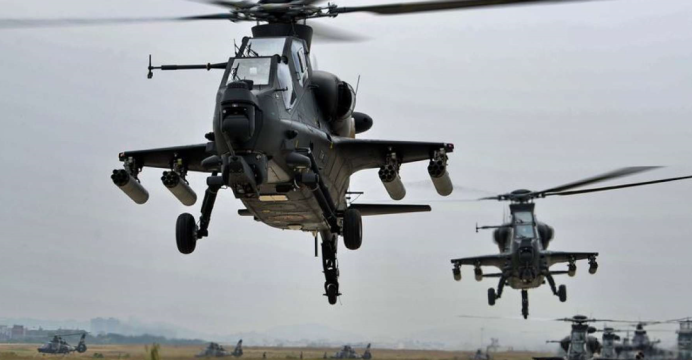 The Pakistan Army Aviation Corps’ AH-1F/S Cobras form the mainstay of the service arm’s dedicated attack helicopter force. Originally acquired in the 1980s and reinforced after 2005 (as part of a U.S military assistance package), the near 40-strong Cobra fleet (Flight Global) has reached the point where a suitable successor must enter the pipeline, so as to ensure the Army’s close air support (CAS) capacities are not only maintained, but strengthened.

At this stage it seems that the Army has settled its future requirements through the selection of the Bell AH-1Z Viper, CAIC Z-10 Thunderbolt and Mil Mi-35 Hind. Pakistan secured a purchase for 15 AH-1Zs and 1000 AGM-114 R Hellfire II laser-guided air-to-ground missiles (AGM) in a $952 million U.S. deal with Washington in April 2015. A few months later in August, Pakistan ordered four Mi-35s from Russia with a possible goal of acquiring up to 20 in total. The Army also took delivery of three Z-10s from China for evaluation and testing in the Army’s present operational theatre (see Quwa’s article on Pakistan’s transition to counterinsurgency for more details).

The Army’s decision to choose three different platforms is interesting. That said, it is important to note that the Mi-35 is not necessarily a dedicated attack platform. Yes, it can be equipped along the same lines as the AH-1Z and Z-10 in terms of AGMs, but with its capacity to carry up to eight troops, the Mi-35 could serve as more than just an attack platform. The rationale for this idea stems from the fact that the Mi-17, currently the Army’s main means of ferrying troops into and out of hot-zones, lacks protection in key areas, such as the cockpit. Not only does the Mi-35 directly rectify this (with armoured protection in the cockpit area), but its solid armament capacity makes it capable of CAS and armed escort as well. It is possible that the decision to acquire Mi-35s is meant to reinforce the Army’s capacity for air assault operations.

While the AH-1Z is a distant descendant of the AH-1F/S, it is a different and much more capable platform. For example, the Thales Top Owl helmet mounted display and sight (HMD/S) system enables the AH-1Z pilot to cue the Viper’s guided munitions (such as the Hellfire II-R) to specific targets with the pilot’s eyesight. The Top Owl HMD/S helmet also enables the pilot to readily see the AH-1Z’s forward-looking infrared (FLIR) feed as well as utilize integrated night vision optics.

The AN/AAQ-30 ‘Target Sight System’ (TSS) is the primary sensor of the AH-1Z. It is essentially a FLIR pod integrated with an electro-optical (EO) sensor as well as a laser rangefinder and designator. This is the primary means by which the AH-1Z would detect, track and engage targets. In addition, the AH-1Z possesses a solid self-protection suite comprised of passive warning sensors, such as the AVR-2A laser warning receiver, APR-39A(v2) radar warning receiver and AAR-47 missile warning device. While the AH-1Z is a sound anti-armour and CAS asset, the lack of a millimeter wave (mmW) radar, which would enable it to track targets based on their metallic signatures, would place it a notch behind the AH-64D Longbow. It is also unclear (if not unlikely) that the mmW-based ‘Cobra Radar’ being developed for the AH-1Z would be available to Pakistan.

Furthermore, war time circumstances notwithstanding, the AH-1Z will almost assuredly be committed to Pakistan’s counterinsurgency (COIN) operations. It is unlikely, especially given the current political climate in the U.S, that Pakistan would try to make a case for additional AH-1Z on the pretext of strengthening its borders. But given the expense of raising the necessary operational and maintenance infrastructure of inducting a new platform, it is possible that the Army will try to order additional AH-1Zs in the future. However, it is unlikely one would see a significant number of them. In any case, the AH-1Zs could readily be used against external state-level threats should the need arise. For example, the Hellfire II-R that Pakistan is buying with the AH-1Z retains the anti-tank capability of older Hellfire II versions.

For external threats, the Chinese Z-10 Thunderbolt seems to be the Army’s answer. Besides the three that were inducted last year for testing, it is unclear exactly what the Army intends for the Z-10. Like its contemporaries (such as the AH-1Z) the Z-10 was designed to carry the full range of passive and active self-protection subsystems (e.g. laser warning receiver). Moreover, the Z-10 can also be equipped with the same kind of weaponry as the AH-1Z, such as laser-guided AGMs and even air-to-air missiles. The Z-10 is also poised for additional improvements, especially in terms of sensors. For example a millimeter wave (mmW) radar is reportedly on the cards, and unlike the AH-1Z, is likely that Pakistan would not face as many hurdles acquiring it as it might for the Cobra Radar.

The Z-10 could be the ideal solution for building a sizable dedicated attack helicopter fleet. Granted, the Army has not voiced such intentions, but capable attack helicopters have become a staple for modern armies, especially in terms of building their CAS capabilities, especially against enemy armour. A large number of Z-10s could open several major opportunities, not just for the Army, but for the defence industry as well. For example, a sufficiently large number could make technology transfer (in terms of local assembly, overhaul and parts manufacturing) a real possibility, thereby seeding the foundations of a helicopter industry in the country.

Not only would this enable Pakistan to acquire a stronger understanding of the technology, but it would also enable the Army to readily repair its machines and source spare parts, which in war would be a critical gain. Pakistan Aeronautical Complex (PAC) Kamra has emerged as a solid vendor in terms of fixed-wing aircraft. Perhaps it is time to explore helicopters. It need not be PAC Kamra only that takes on this role. Other regions, such as Gwadar, could also enter the aviation development space through the Z-10 or other helicopters.