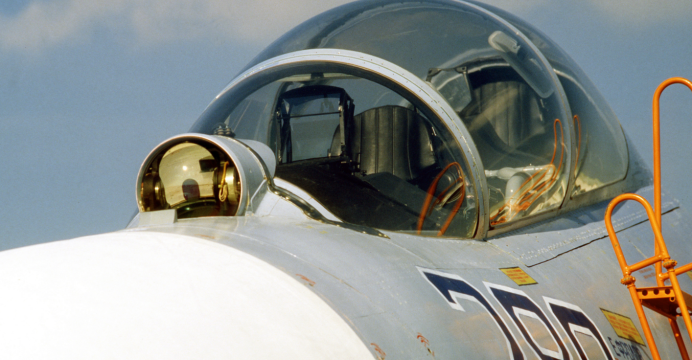 Modern air-to-air warfare is often – and correctly – understood as the exchange of air-to-air missiles (AAM) between fighter aircraft. However, it is much more than that; in fact, the act of firing an AAM is the culmination of a series of events involving many other systems. These systems include capable on-board and off-board sensors, tactical datalink connectivity, and the different AAMs themselves. When working in harmony with one another, these systems enable modern day air forces and naval air arms a credible opportunity at intercepting enemy aircraft and, in the process, acquiring air superiority.

Quwa will take a look at each of these systems. These pieces are not exhaustive resources on the subject, but they should offer readers a workable understanding of the topic.

For readers with a desire to have a thorough understanding, especially from a technical standpoint, then it would be advisable to consult more in-depth resources.

Although not a very common subsystem at present, it is worth taking a look at IRST systems as they are closely intertwined with modern within-visual-range air-to-air missiles (WVRAAM), especially fifth-generation ones such as the AIM-9X and IRIS-T. At their core, IRST systems are heat-seeking sensors, just like forward looking infrared (FLIR) pods, but they go a few steps further by enabling users to search and track individual airborne targets.

Since IRST sensors are simply ‘receiving’ an emitting heat signal, they are “passive” sensors. In other words, they do not emit signals of their own (unlike radars, which transmit radio waves). This enables the tracking fighter to avoid alerting the target’s RWR [radar warning receiver], which is designed to react to active radar signals. In a within visual range dogfight, an IRST system can enable the user to possess an enhanced level of situational awareness of the combat zone without having to switch-on the radar, thus avoiding the risk of being an “exposed” target to an enemy’s RWR.

IRST systems have seen a surge of interest in recent years, especially in Europe via the Saab Gripen NG, Eurofighter Typhoon and Dassault Rafale. However, it is important to note that it is not a new system, even for Western fighters. For example, the U.S began equipping numerous fighter types (e.g. F-102 Delta Dagger) with IRST pods in the 1960s. At that time, the rudimentary nature of IRST systems limited them to basically supporting onboard radars, which in turn advanced considerably by the late 1970s, thereby making early-generation IRST pods unnecessary.

Advances in modern electronics have enabled current day IRST systems to serve in lieu of radars (in specific situations, such as close-quarters air combat) by giving fighter pilots a relatively sound level of situational awareness of nearby airborne threats. This includes scanning the area around the fighter (similar to a radar), track targets and inform the pilot of the target’s distance relative to his or her own aircraft, and even enable the pilot to mark targets of interest.