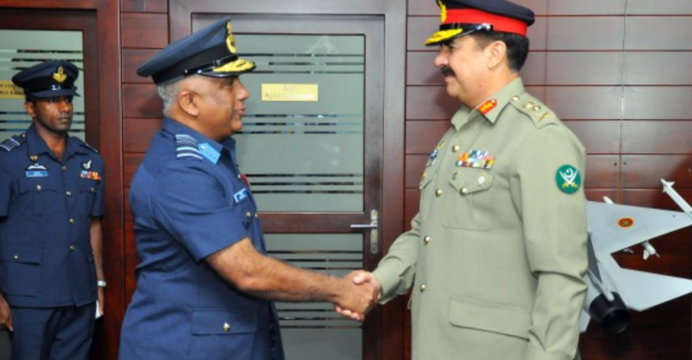 A JF-17 model with the SLAF roundel in the background of the SLAF Air Chief's office.
Country PortfolioAsia Pacific
Dec 13, 2015 Bilal Khan -

Is Sri Lanka looking to buy JF-17s from Pakistan?

Last week an article emerged on Ceylon Today outlining not only a possible sale of 10 JF-17s to the Sri Lanka Air Force (SLAF) by the Pakistan Aeronautical Complex (PAC), but additional news about mounting Indian objections against the deal.

This news is interesting on multiple levels. For one thing, it lends fuel to a long speculated but unconfirmed engagement between Sri Lanka and Pakistan in regards to the JF-17. There have been some possible indicators, such as a model of a JF-17 with SLAF roundels, but nothing in the way of actual credence. Granted, Gagani Weerakoon’s piece does not provide official confirmation, but the details enclosed in her piece line up with the reality of the matter quite well, and as a result, the issue is worth discussing.

China and Pakistan secured their first export customer for the JF-17 in 2015. The buyer was not disclosed, but it is widely believed that to be Myanmar. A sale to Sri Lanka would make the JF-17 a primary combat aircraft in South Asia, and that idea may help generate additional leads in other parts of the world. But there is another aspect to this news as well, and that is India’s purported displeasure at Sri Lanka’s rumoured purchase of JF-17s from Pakistan (though in reality it would be China and Pakistan).

According to Weerakoon, India was willing to offer a line-of-credit to Sri Lanka on the condition that it buy fighters “from any country other than Pakistan.” In response, Pakistan offered 10 (likely surplus) F-7Ps atop of the JF-17s should the Sri Lankan government ultimately stick with the Thunder. The deal was slated to be officially announced during Prime Minister Nawaz Sharif’s visit to Colombo this coming January. With Delhi’s apparent anxiety in mind, Colombo is now looking to tie the JF-17 decision to other policy matters, such as having India’s explicit blessing to permitting Chinese investors join a major urban development program in Sri Lanka.

If the above is indeed panning out as described, then it may be worth looking at what each actor stands to gain and lose from this deal. Starting with Sri Lanka, it seems the SLAF has managed to secure for itself a fairly decent fighter modernization route, JF-17 or otherwise. If it acquires the JF-17, then it will have access to a modern fighter platform capable of engaging in precision-strike and air defence roles at beyond and within visual range (BVR and WVR respectively). If it instead decides to opt for India’s option for a line-of-credit for ‘anything but JF-17’, then it could theoretically acquire a directly comparable platform in the form of the Korean Aerospace Industries and Lockheed Martin FA-50.

It is unlikely India particularly cares about such capabilities making their way to Sri Lanka, especially since it was apparently willing to even arrange a financing plan for the SLAF. The technology in question, e.g. precision-guided munitions or even BVR air-to-air missiles, are increasingly becoming common and well distributed on the global defence market. If not the U.S, Russia or Europe, then Sri Lanka could potentially acquire the aforementioned systems from the likes of China, Israel, South Africa and Brazil.

The real problem for India is evidently the prospect of Pakistan being involved, especially in as significant a role as the leading vendor (which would obviously be the case if it secures a JF-17 sale). Theoretically a JF-17 sale to Sri Lanka would enable Pakistan to have a relatively well-entrenched presence in Sri Lanka in the form of personnel (who would assist in training and integration). The sale could potentially even manifest in stronger forms of cooperation between the armed forces of Sri Lanka and Pakistan, seeing the former send more officers to the latter for education and/or liaison work.

However, to be frank, even if the aforementioned events were to occur, it does not necessarily mean that Pakistan is extending itself in the region. One of the primary plus-points trumpeted with the JF-17 is the promise of not tying the buyer into wider political machinations, so Pakistan reneging on that (especially given the state of its economy and foreign relations influence generally) is incredibly unlikely. That said, the development of requisite maintenance infrastructure (for the JF-17) in Sri Lanka would enable the PAF and SLAF to engage more frequently in the form of exercises; the mere image or perception of wider regional ‘flexing’ has its own value after all.

In summary, the issue is a bit bigger than it deserves to be, especially for 10 fighters. That said, should the SLAF ultimately decide to stick with the JF-17, then it has a lot of interesting options in the way of air-to-air and air-to-surface munitions from China, especially in terms of the latter, which even include extended-range munitions such as the GB6 stand-off weapon (SOW) and C-802A anti-ship missile (AShM). More broadly, it will be interesting to see if and how the SLAF transitions to a more network-centric force across the board, be it aircraft, land-based sensors and ships.