Brimstone, JAGM and The Future of Air-to-Ground Missiles
February 27, 2020 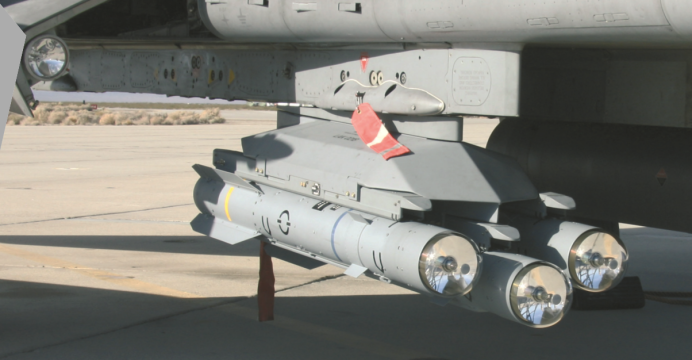 Up to three Brimstone AGMs can be housed on a single-station launcher. Photo credit: MBDA
System ProfileAir-to-Surface
Dec 6, 2015 Bilal Khan -

Brimstone, JAGM and The Future of Air-to-Ground Missiles

The MBDA (UK) Brimstone air-to-ground missile has taken on quite a bit of attention in recent days following Britain’s decision to deploy its combat aircraft to Syria. In fact, Prime Minister David Cameron even specifically mentioned the Brimstone as one of Britain’s key munitions for the fight to come. Not only that, but Prime Minister Cameron even went a step further to state that the capabilities inherent in the Brimstone are not only useful, but unique in its targeting and engagement, such that the United States itself does not have a direct equivalent. Popular Mechanics has a solid overview of the Brimstone, including a comparison of it to one of America’s mainstay air-to-ground missiles, the AGM-114 Hellfire II.

In modern warfare, air-to-ground missiles (AGM) are indispensable tactical munitions. They are designed to be relatively small and lightweight, allowing them to be deployed from a wide range of delivery platforms, including those as small as unmanned aerial vehicles (UAV) such as the MQ-1 Predator. The underlying concept, which is that of guided missiles, could be traced back to the Second World War when the Germans began deploying a range of wireless and wired-guided munitions against the Allies. However, in terms of the modern age, incredibly popular missiles such as the American TOW (short for Tube-launched, Optically tracked, Wire-guided) and Russian 9M14 Malyutka began defining the concept as the world understands it today.

The AGM-114 Hellfire, which was originally meant to be basis for the Brimstone, helped usher in the concept of a wireless precision-guided AGM into reality. Whereas earlier systems such as the TOW were dependent upon the shooter’s line-of-sight, the original Hellfire used a laser-seeker to guide it to its target. What the launcher required was the means (either from itself or a secondary source such as personnel on the ground or another aircraft) to ‘mark’ the target with a laser-designator (similar to the use of laser-guided bombs or LGB). In other words, the Hellfire was not a “fire-and-forget” solution, though it was far more flexible than its wire-guided predecessors.

The AGM-114 Hellfire II, and more specifically, the AGM-114L Hellfire II “Longbow” introduced “fire-and-forget” capabilities to the Hellfire-series through the inclusion of a millimeter wave (mmW) radar-seeker. Somewhat akin to active radar-guided seekers (which seek radio wave signals) on air-to-air missiles (AAM) and anti-ship missiles (AShM), the mmW-seeker is designed to home in on moving targets. By using extremely high frequency (EHF) signals, a mmW radar or radar-seeker is capable of picking up metallic signatures (just think of the airport security screening tool). In practical terms, the Hellfire Longbow, Brimstone and mmW-tipped missiles are capable of striking moving vehicles.

Although an active radar-seeker of any kind, including mmW, is liable to energy consumption, the tactical nature of AGMs makes this a non-issue. These missiles are meant for use within hot-zones, e.g. attack helicopters facing tanks or other armoured vehicles. However, the Brimstone seeks to alter that dynamic.

Originally conceptualized as a mmW-tipped development of the original AGM-114 Hellfire, the Brimstone program evolved into producing an entirely new AGM platform. Like its Hellfire counterpart the Brimstone incorporates a range of guidance and seeker modes, including inertial navigation and mmW (MBDA). It is also loaded with tandem-charged warhead, which ignites a small charge (for reactor armour) followed up by a larger blast (for the underlying armour of a tank or vehicle).

But none of the above decisively differentiate the Brimstone from the Hellfire or other contemporaries. The real shift produced by the Brimstone lies in its substantively longer-range and the fact that it was designed to be used in a network-centric warfare environment. Whereas the Hellfire-II has a range of less than 10km, the Brimstone can be fired from over 18km (from fixed-wing aircraft) and the ability to be used from fighter aircraft. But the stand-off element can best be appreciated by the network-centric nature of the Brimstone. For example, the pilot of the launching aircraft can feed the Brimstone coordinates of a general area (inertial navigation), and as the missile reaches the area, its mmW-seeker can hit vehicles in that area. The Brimstone is currently equipped with a dual mmW/laser-seeker (MBDA).

The U.S will eventually adopt this approach through the Joint Air-to-Ground Missile (JAGM) program, which will replace not only the Hellfire II and TOW, but the electro-optical TV-guided AGM-65 Maverick AGM as well. But it should be noted from the onset that like the Brimstone (and even today’s Hellfire II), the JAGM is meant to be a highly focused munition. This is not a wide area munition; rather, it is meant to take out specific vehicles or structures. In a state-on-state war the JAGM and Brimstone would be used in tandem with an array of munitions such as precision-guided bombs (PGB) and cruise missiles, but in a specific scenario such as counterinsurgency (COIN), the Brimstone and JAGM could emerge as being a military’s weapon of choice.

Quite a bit of work has been done on Quwa covering the capabilities of lightweight delivery platforms designed for COIN, such as the A-29 Super Tucano and the promising AHRLAC. Missiles such as the Brimstone, JAGM and the myriad of similar concepts that will assuredly follow seem to be an ideal fit for these lightweight COIN platforms. Whereas almost all COIN operations today are up against foes with little to practically no anti-air warfare (AAW) capabilities, the introduction of the Brimstone today and JAGM in the future seem to factor in the scenario of possible AAW threats in COIN environments.

The Brimstone is a lightweight system, weighing in at just under 50kg, compared to the 200kg+ AGM-65 Maverick. Granted, the Brimstone’s payload is not as heavy as the Maverick, but it was not meant to be, given that it was designed to utilize precision and a very high accuracy as a means to ensure the target is destroyed (as opposed to explosive power or wide area coverage).

The weight class of this munition is perfectly suited for aircraft such as the A-29 Super Tucano (which can carry as much as 1500kg), but it is not only about giving the A-29 lethality, the Brimstone would give this kind of aircraft relative stand-off capability. Whereas a man-portable air-defence system (MANPADS) can have a range of up to 10km, the Brimstone can be fired at ranges in-excess of 20km. Munitions such as the Brimstone make using modern turboprops in combination with their inherent agility and maneuverability strengths (relative to their propulsion) a reality.

There is no doubt that the coming years will mark the widespread adoption of the Brimstone and JAGM-like munitions across the world. Given the success this missile thus far and the commitment of the U.S military towards JAGM, it will be interesting to see what other vendors decide to pick up the mantle of fulfilling the rest of the world’s requirements. One should reckon that South Africa’s Denel Dynamics will at the forefront, along with Israel’s Rafael.