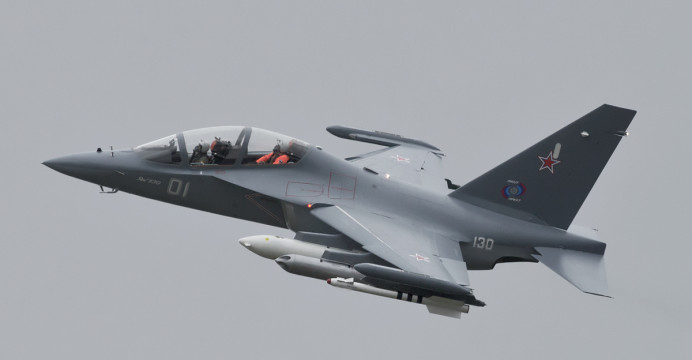 In the aftermath of the recently concluded order of 4 Mi-35 attack/transport helicopters, there are a few media reports floating about purporting that the Pakistan Air Force (PAF) is “eyeing” the Yak-130 advanced jet trainer.

The whole topic of ‘lead-in-fighter-trainers’ (or LIFT) is an interesting one in that a lot has been said to drive momentum and interest in dedicated LIFT aircraft such as the KAI/Lockheed Martin T-50, Alenia Aermacchi M-346 Master, and Yakovlev Yak-130. But despite the chatter, we have not seen a whole lot of momentum behind these platforms in terms of orders. Thus far we have seen around 13 air forces fully commit to buying any one of the aforementioned aircraft, and a substantial proportion of them are seemingly doing so with the aim of operating the trainers as combat aircraft as well.

As for the PAF, a recent interview with the current commander (Air Chief Marshal Sohail Aman) by AirForces Monthly seemed to indicate that the PAF did not see a substantial enough gain in acquiring LIFT aircraft compared to its current set-up (of using Karakorum K-8s for intermediate and advanced jet training, and twin-seat variants of its fighters for fighter conversion). As the JF-17 steadily assumes its position as the PAF’s backbone fighter, a twin-seat variant may used as a combined LIFT and operational conversion unit (OCU), especially as the cost difference (from an acquisition standpoint) between the JF-17 and a LIFT aircraft such as the KAI T-50 is not much.

The only loose variable here is if the Yak-130’s acquisition and operational costs are decisively lower than that of the JF-17. That might be possible if the reported price-point of the Yak-130 is in the area of $15mn per unit.