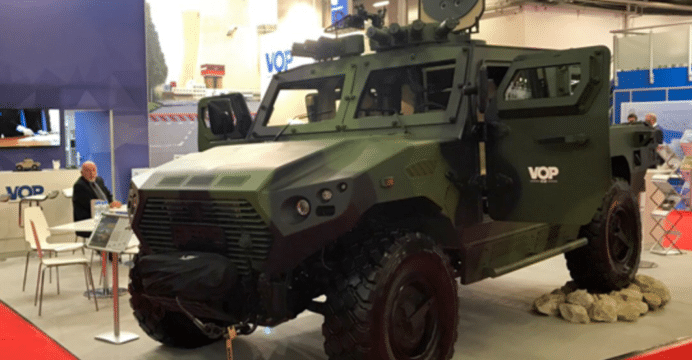 VOP CZ and NIMR showcase ‘winterized’ AJBAN 440A for Europe

According to a NIMR press release (via Defense Aerospace), the NIMR 440N confirms to STANAG 2895 (-32°C to +55°C), establishing that it can “fully perform” cold weather conditions. It also conforms to NATO EMC [i.e. Electro-Magnetic Compatibility] MIL-STD 416F along with other NATO Compliance standards.

Since 2015, VOP CZ has been the manufacturer of the AJBAN 440A’s armoured cabins. In February, both companies expressed hope that the expanded partnership would spur the production of 1,000 vehicles in the next three years, generating revenue of over $500 million U.S.

In March, the Czech Republic listed a requirement for 700 light-armoured 4×4 utility vehicles to replace the Army of the Czech Republic’s (ACR) UAZ and Land Rover Defender vehicles. This is certain to be NIMR’s leading opportunity, securing which would strengthen its position in the region.

NIMR Automotive is a member of the Emirates Defence Industries Company (EDIC), which is one of Abu Dhabi’s spearheads for localizing the supply of defence equipment.