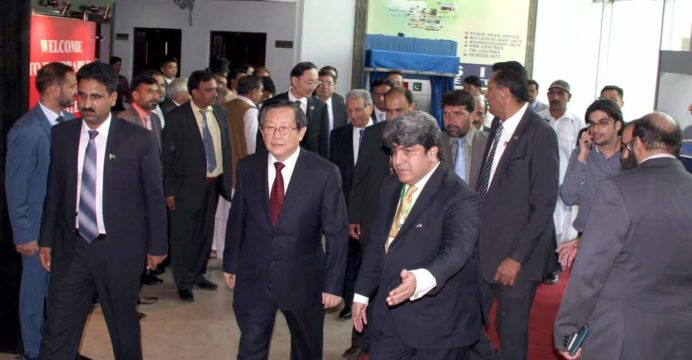 As part of its One Belt One Road (OBOR) initiative, China launched a China-South Asia Technology Transfer Centre (CSTTC) in Islamabad, Pakistan on July 08.

Speaking to local media (e.g. The Express Tribune), the Chairman of the PCSIR, Dr. Shahzad Alam, stated that “China would provide financial support to Pakistan [and other states] for … centres and research laboratories for technology transfer and development.”

According to a PCSIR press release, Dr. Alam said that the two sides discussed “26 joint research and development” and that memoranda-of-understanding (MoUs) were in the pipeline to begin implementing these proposals. Dr. Alam added (via APP) that energy and engineering were areas of priority.

It is unlikely that the CSTTC will serve as a direct conduit for defence technology transfer programs. Rather, such transfer-of-technology (ToT) elements are facilitated through acquisitions. The Pakistan Navy’s order for eight Hangor-class submarines from China Shipbuilding Industry Corporation (CSIC) will require CSIC to establish a production-relevant training centre at Karachi Shipyard & Engineering Works (KSEW) to enable KSEW to carry out its workshare tasks. With the first steel-cutting ceremony scheduled for October 2020, KSEW is responsible for manufacturing four of the eight Hangor-class submarines.

However, Pakistan could utilize the CSTTC to facilitate capacity building in areas that support indigenous development and manufacturing. For example, investment in material sciences, metallurgy, electronics, programming and other such areas could help Pakistan build domestic suppliers of key inputs for military applications. In this respect, the CSTTC has the potential to partly feed the Kamra Aviation City initiative.

Besides the necessity of time, there are potential obstacles and risks. For Pakistan to assume ownership of critical and costly tasks, it will require local capacity in terms infrastructure and human resources. With the latter, several steps are being undertaken to increase the number of science, technology, engineering and math (STEM) professionals, such as Air University’s expansion campus in Kamra. However, investment is also necessary for expanding the availability – and enrollment – of primary and secondary education in STEM and other relevant fields so as to guarantee a healthy candidate pool for Air University and others.

Pakistan’s economic constraints have hampered the government’s fiscal capacities as well as the private sector’s ability and willingness to support development. Granted, insufficient policy coordination between Pakistan’s various state organs and government ministries are factors for causing delay and inefficiencies, but insufficient capital (public and private) stymies economic activities necessary for employment, wealth creation and the creation of high-value exports. Thus, foreign capital is generally sought to sustain these activities. If these foreign investments are connected to ToT, then the outcome of ToT may be less than optimal. For example, a foreign investor may tailor ToT to manufacturing (if not less) without necessarily investing in domestically sourcing inputs, such as composite materials.

Unfortunately, it is difficult to approach fiscal stability when significant public funds are routinely required to sustain recurring counterinsurgency campaigns (following the U.S. invasion of Afghanistan) and to repay public debt (borne from prior and future fiscal deficits deepened by debt and internal conflict). Traditional challenges, such as political instability and public corruption, compound the relatively newer challenges, thus dampening the potential stated by the PCSIR (or the PAF in the case of Kamra Aviation City). However, if steps are taken to address these structural challenges, the CSTTC could valuably assist Pakistan in terms of education, building capacity for organic research and development and providing both talent and material means for the rise of local industry players to serve domestic needs and compete globally.